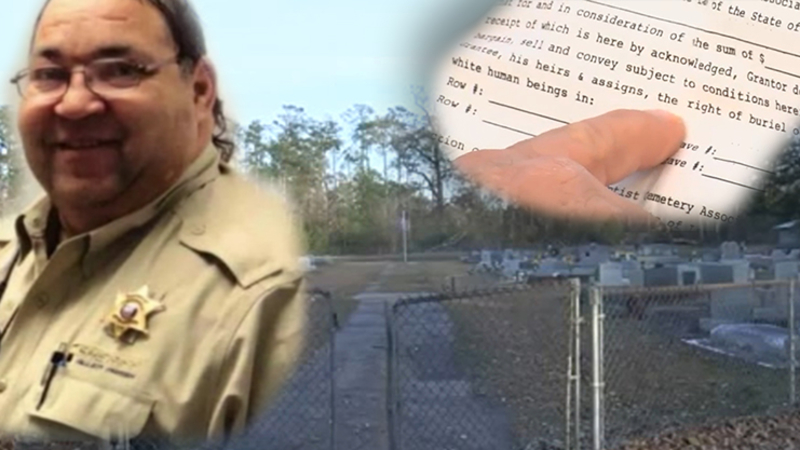 OBERLIN, Louisiana -- A southwest Louisiana sheriff's deputy who lost a brief battle with cancer won't be buried in a cemetery near his home.

Until recently, Oaklin Springs Cemetery in Oberlin only allowed certain races to be buried there, KPLC-TV reports.

When Darrell Semien's widow, Karla, met with a cemetery representative, she was stunned by their response.

"It was in their by-laws that the cemetery was 'whites only,'" Karla Semien told KPLC. "I just kinda looked at her and she said, 'There's no coloreds allowed.'"

Their daughter, Kimberly, was also there for the decision.

"Just blatantly, with no remorse: 'I can't sell you a plot for your husband,'" Kimberly said.

The cemetery representative was not identified, but Oaklin Springs Cemetery Association president Creig Vizena confirmed the "whites-only" clause was in the original by-laws. Vizena said the association voted to change the bylaws and regrets not knowing about the rule until the Semiens were turned away.

Vizena said he even offered a plot of his own in the cemetery in an attempt to make a peace offering to the family.

"That's how strongly I feel about fixing it," Vizena said.

The Semiens decided to bury Darrell at Sonnier Cemetery in Oberlin.

They told reporter Jennifer Lott that nothing can change the fact they were initially denied based on skin color.

Darrell Semien was an 18-year member of the Oberlin Baptist Church, and was a police officer and sheriff's deputy for nearly two decades. He's survived by his wife, three sons, four daughters, a granddaughter, and a number of other relatives. He was 55 years old.
Report a correction or typo
More Videos
From CNN Newsource affiliates
TOP STORIES