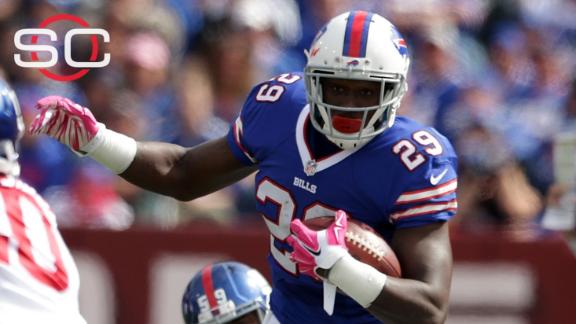 Williams, a fifth-round rookie out of Florida State, filled in for injuredLeSean McCoyand rushed 18 times for 40 yards and caught a 23-yard touchdown pass during the Bills' 24-10 loss to the New York Giants. McCoy remains out with a hamstring injury.

Williams now enters the NFL-mandated concussion protocol and must be cleared before returning to physical activity.

"He told our trainers several hours after the game that he wasn't feeling well and our medical staff took a look at him," Whaley told WGR 550. "They put him through further evaluations late yesterday afternoon, and it was determined [to be] a concussion. So we'll see how he proceeds throughout the week."

If Williams and McCoy cannot play Sunday against the Titans, the Bills would turn to Boobie Dixon and Cierre Wood at running back. The Bills also signed veteran running backDan Herron on Tuesday. Herron had been released by the Indianapolis Colts earlier this season.

Running backs Trent Richardson and Alfonso Smith also were among the free agents the Bills worked out at their facility Tuesday, according to multiple reports.

"We feel very comfortable with Boobie Dixon and Cierre Wood, that they've been here," Whaley said.

"Again, Karlos, with that concussion protocol, he may be able to -- you know, day-to-day -- and hopefully he'll be in there at the end of the week."

Williams gained 110 yards on 12 carries in a Week 3 win over the Miami Dolphins.

McCoy told reporters last week that he won't play until he feels 100 percent after suffering a setback two weeks ago in his recovery from a hamstring injury.