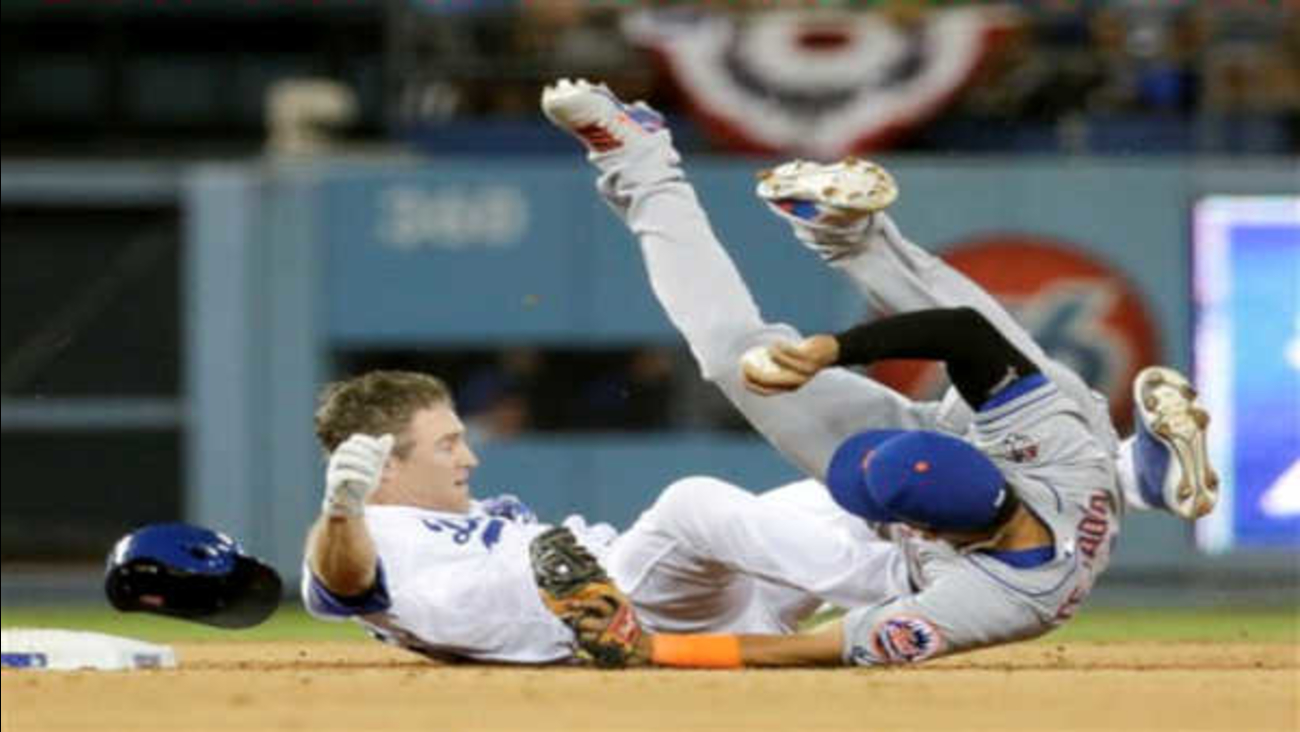 Utley's slide flipped Tejada during a four-run rally in the seventh inning that helped the Dodgers win 5-2 Saturday night and tie their NL Division Series at one game apiece.

"I feel terrible that he was injured. I had no intent to hurt him whatsoever," said Utley, who had reached with a pinch-hit single. "Any time there's a double play you should do your best to break it up."

The Mets were leading 2-1 when the Dodgers put runners at the corners with one out against Noah Syndergaard. Bartolo Colon came on in his first career postseason relief appearance after 10 starts, and Howie Kendrick hit a grounder up the middle.

Murphy flipped to Tejada, who took the throw awkwardly for an apparent force as Utley slid maybe a foot outside of the base and past the bag and slammed into the shortstop with Tejada's back turned to the play. That caused Tejada to flip over as the tying run scored from third.

"Only Chase knows going in there what the intent was," third baseman David Wright said. "I have a problem with the play on a number of different levels, one being the slide itself. In my opinion, he wasn't anywhere close to the bag. With that being said, he never touched the bag. And I think the 'neighborhood play' is there to protect players. ... It definitely seemed like after that play we lost the momentum and they came up with some big hits."

Joe Torre, MLB's chief baseball officer, will examine the play to determine whether anything "excessive" occurred.

"I'd hate to think that Utley tried to hurt somebody," Torre said. "It certainly was late. That concerns me. The lateness of the slide."

Tejada was put on a flatbed vehicle after an air cast was placed on his leg. The Mets said Tejada sustained a fractured right fibula. Utley was ruled safe on a video review, which determined Tejada's foot missed the bag. Utley also appeared not to touch the base.

"Tejada showed that he didn't touch the bag and Utley never touched second base," Torre said. "The fact that he was called out meant he's not required to touch second base once he's called out. So when the play was overturned, he gets awarded second base on that."

Mets manager Terry Collins wouldn't say whether he thought the slide was clean or not. He said the umpires were "great" in how they handled the review.

"They thought that it's pretty hard to rule that he didn't touch the bag when he hit the shortstop and nobody was tagged, so they have no other call," he said, "so they handled it right."

"Every single guy on the field on both sides, both dugouts, would have done the same thing," Gonzalez said. "It was huge. Got the game tied, and after the replay, gave us a rally."

There was some history between Utley and Tejada. The Mets were angered during a takeout slide by Utley when he played for Philadelphia against them in September 2010.

"Yeah, they're angry," Collins said of his players. "You lose in a playoff series to that serious of an injury, yeah, they're not very happy about it."

"I know Chase is not trying to hurt anybody," he said. "He's just playing the game the way he plays it. He plays it hard, he's aggressive."

Turner called Utley "old-school," saying, "He's a guy that plays balls to the wall and goes in hard. If you're not protecting yourself or you're not in good position when they come in hard like that, you have a chance of getting hurt."

Collins said Wilmer Flores will replace Tejada at shortstop for the rest of the series.

The action shifts to Citi Field in New York for Game 3 Monday, when Brett Anderson starts for the Dodgers against the Mets' Matt Harvey in the best-of-five series.

The Dodgers' Zack Greinke (1-0) allowed two runs and five hits in seven innings. He struck out eight and walked none a night after teammate Clayton Kershaw fanned 11 while losing his fifth straight postseason game.

Kenley Jansen pitched the ninth for the save, completing a five-hitter.

Yoenis Cespedes and Michael Conforto hit solo homers in the second, the latter off the right-field pole. Andre Ethier had an RBI double in the fourth.

Syndergaard (0-1) gave up three runs and five hits in 6 1/3 innings of his first career postseason start. He struck out nine and walked four in following up Jacob deGrom's 13-strikeout performance in winning Game 1. Eight of Syndergaard's first 36 pitches reached 100 mph or more over the first two innings on an unseasonable 90-degree evening.

"Anytime you can go 1-1 against Kershaw and Greinke in their house, I guess we'll take it," Wright said. "But we wanted to get greedy and head back to New York with a 2-0 lead."