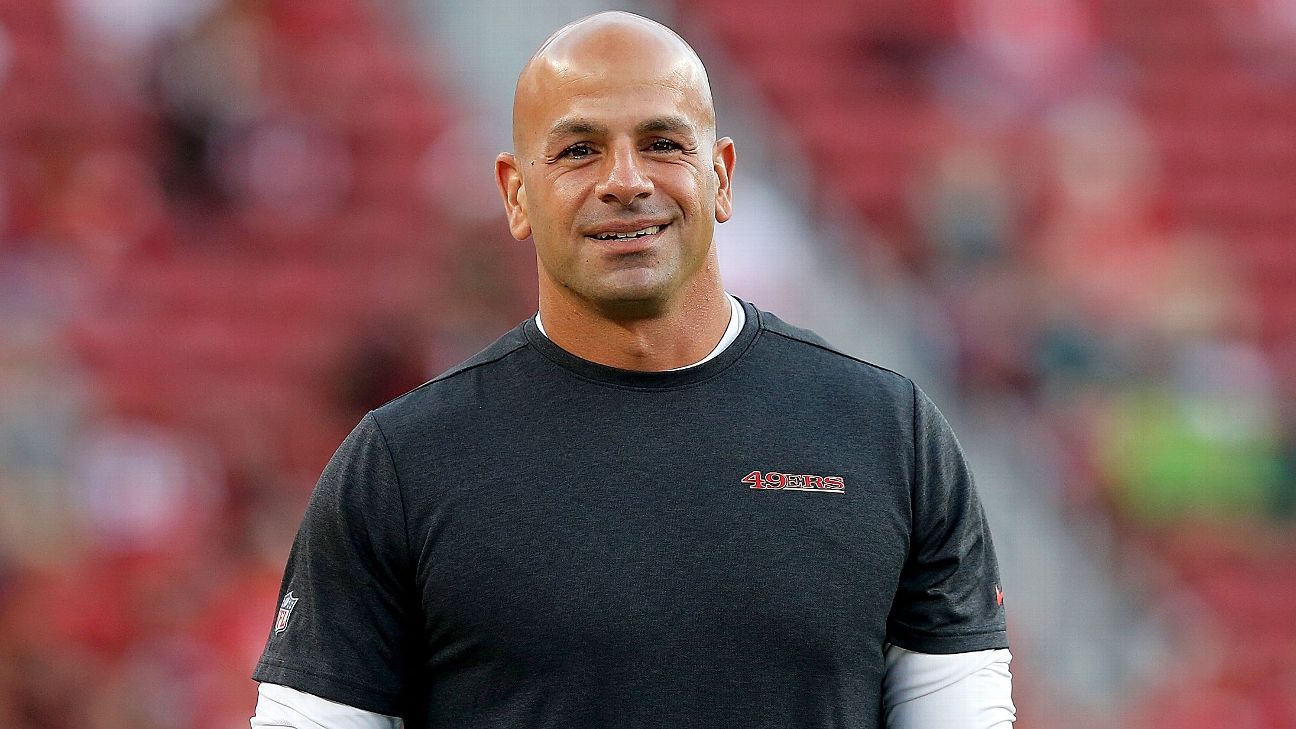 FLORHAM PARK, N.J. -- The New York Jets, coming off one of the worst seasons in franchise history, have reached an agreement in principle withSan Francisco 49ers defensive coordinator Robert Saleh to be their next head coach, the team announced Thursday night.


Saleh, 41, who interviewed virtually last Friday, quickly established himself as the Jets' front-runner. On Tuesday, he flew to New Jersey for a second interview.On Thursday, the Jets concluded a second interview withTennessee Titansoffensive coordinator Arthur Smith. At that point, the Jets held internal discussions and decided to make an offer to Saleh, a source said.

There was plenty of competition for Saleh, who received interview requests from six of the seven teams in the NFL head-coaching market.

Saleh, who is Lebanese American, will join Brian Flores of theMiami Dolphins, Mike Tomlin of the Pittsburgh Steelers and Ron Rivera of the Washington Football Teamas active minority head coaches in the league. The 49ers will receive two third-round compensatory draft picks as part of the NFL's new hiring initiatives to incentivize an expansion of the candidate pool.

Saleh will replace Adam Gase, who went 9-23 and was fired immediately after the 2020 season.

Saleh is regarded as an upbeat, energetic coach. The Jets coveted those traits after two difficult seasons under Gase, whose personality chafed some players. Ownership sought to find a "CEO" coach, someone who could galvanize the organization and build a winning culture.


General manager Joe Douglas, who led the Jets' search, has no prior experience working with Saleh. At the start of the process, Douglas said he was seeking a "great partner" with strong leadership and communication skills.

Saleh spent four seasons as the 49ers' coordinator, inheriting the 32nd-ranked defense (yards allowed) and helping transform it into a top-five unit the past two seasons. Despite a spate of injuries, the Saleh-led defense finished fifth in yards and 17th in scoring in 2020.

Before San Francisco, Saleh served as a defensive assistant with the Jacksonville Jaguars, Seattle Seahawks and Houston Texans. In scheme and personality, he's closely aligned with Seattle coach Pete Carroll.

Nine known candidates interviewed for the job, eight of whom are current NFL assistants. The outlier was former Cincinnati Bengals coach Marvin Lewis, currently the co-defensive coordinator at Arizona State.

Saleh takes on a 2-14 team that finished 32nd and 24th in total offense and defense, respectively. The Jets own the league's longest playoff drought (10 years), and they haven't posted a winning season since 2015.


He faces a huge decision at quarterback, as the Jets must decide whether to stick with Sam Darnold -- the NFL's lowest-rated passer in 2020 -- or draft his replacement. Douglas has the final say, but he said the coach will have significant input.

The roster needs upgrading at almost every position. The Jets don't have a single player with Pro Bowl experience, and they have only two players under contract who are considered building blocks -- defensive tackle Quinnen Williams and left tackle Mekhi Becton.

Saleh grew up in Dearborn, Michigan, and attended Northern Michigan University, where he graduated in 2002 with a degree in finance. 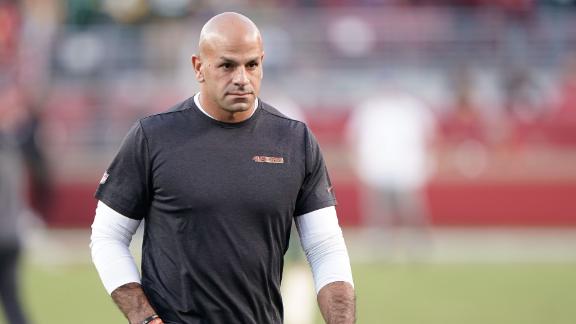 How did the Jets beat out other teams for Robert Saleh?
Rich Cimini breaks down the Jets reaching agreement with 49ers defensive coordinator Robert Saleh to be their new head coach, and why he fits what the organization is looking for. 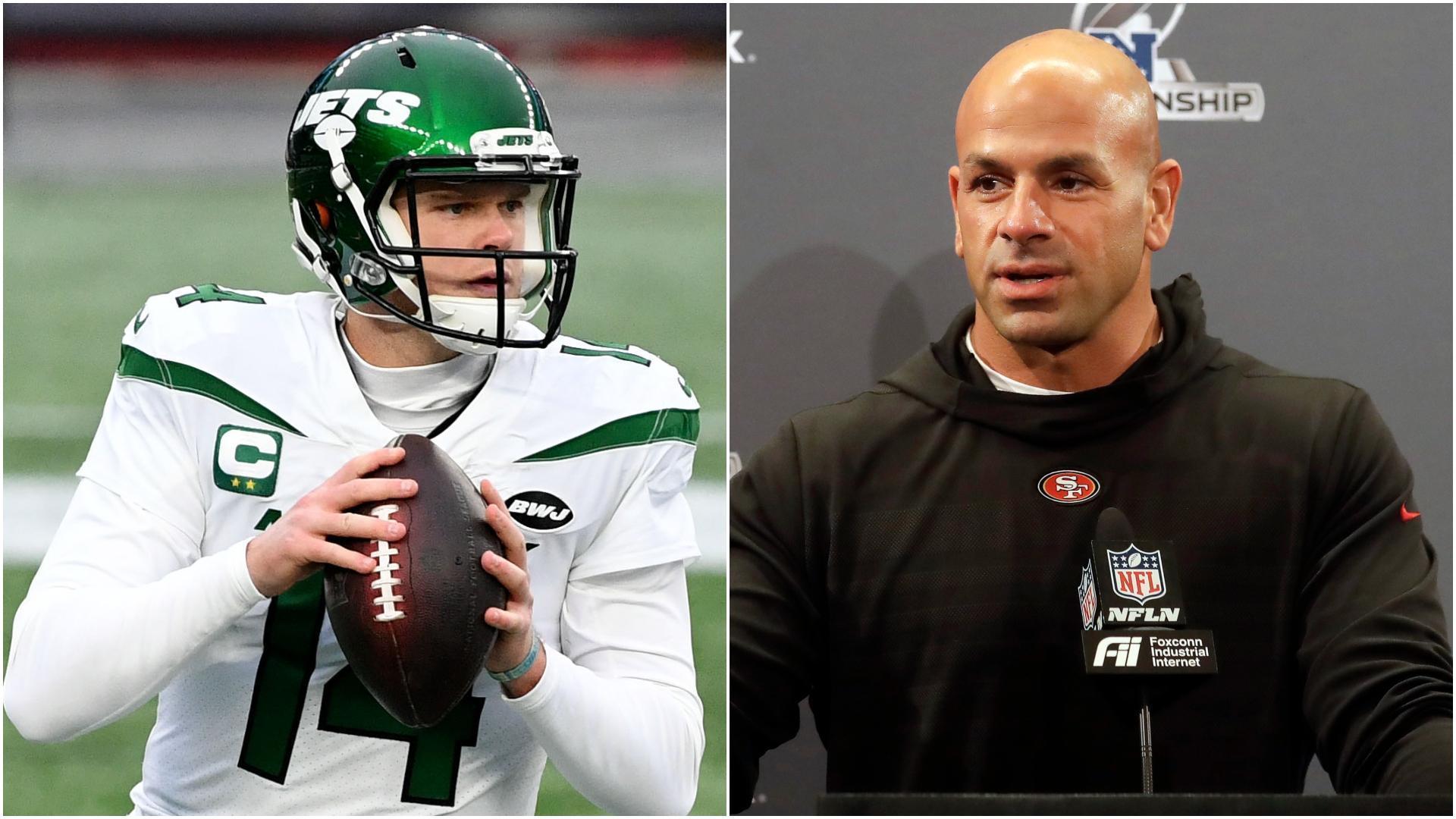