Staten Island man reunited with the officers who saved him 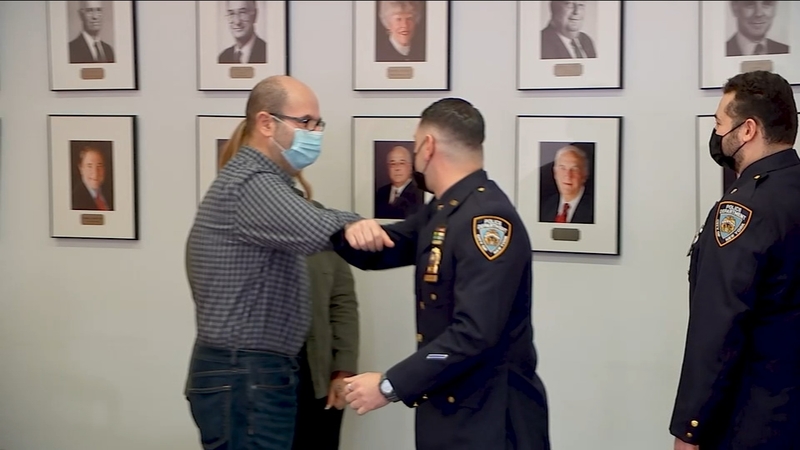 Staten Island man reunited with NYPD officers who saved him

STATEN ISLAND (WABC) -- It's a reunion between heroes and the man they saved.

On January 30, Sal Sgroi collapsed in the parking lot of the Staten Island Home Depot where he is a department supervisor. At the same time, two off-duty NYPD officers were pulling into the lot.

"His bike needed a little fixing, so we went to Home Depot to pick up a screw he needed," NYPD Detective Dominik Ciaravino said.

That's when they saw Sgroi on the ground.

"He looked at me I looked at him and we said, 'Let's go,'" Ciaravino said.

For about seven minutes, they performed CPR chest compressions until the ambulance arrived.

Dr. Frank Tamburrino of Staten Island University Hospital says Sgroi had a massive heart attack -- his main artery 100% blocked. It's called a widow maker, but thanks to that continuous CPR, Sgroi survived.

"Every minute that passes there is a 10% increase in the persons' mortality, so by ten minutes, it's very hard to get someone back, so selflessly is what allowed him to live," Tamburrino said.

Sgroi appreciates them, and so do his wife and kids.

"I think thank you is ever going to be enough," Sgroi's wife Kim said. "I want to hug them right now, and I know we cant."

But seeing this family together was thanks enough.

"I teared up, so happy he is with his family," police officer Jason Milman said. "Truly nice to know you saved a life."

Sgroi is due for a follow-up with his cardiologist in mid-March, but until then, he will take it easy at home. His plan is to get back to work at the Home Depot as soon as his doctor gives him the go ahead.

Jing Fong recently announced that it plans to serve its last meal on March 7, but will still continue to offer takeout and delivery service.