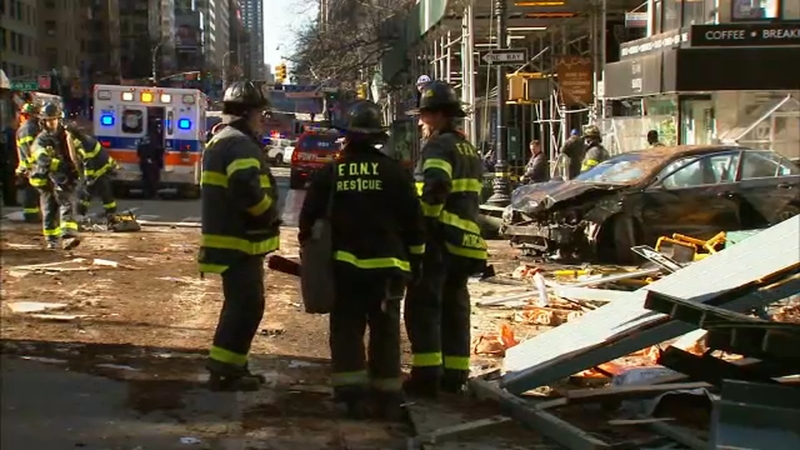 EAST SIDE, Manhattan (WABC) -- Eight people were injured when a van crashed into a car on Manhattan's East Side Friday morning, sending the vehicle careening into an outdoor dining setup and scaffolding.

Six adults and two children were injured in the crash at 50th Street and Second Avenue around 8:40 a.m.

Authorities say the 66-year-old driver of a white van was heading southbound on Second Avenue when it collided with the rear of a Toyota Camry.

The Camry then crashed into the outdoor dining area in front of 945 Second Avenue, which was unoccupied at the time.

A van crashed through an outdoor dining setup and a bus stop on Manhattan's East Side Friday morning, injuring six people.

The white van then traveled another block, jumped the curb, destroyed a fruit stand, and came to a rest in scaffolding.

Several people in the Camry were hurt, as well as some pedestrians.

Four of the injured people were taken to Bellevue Hospital. None of the injuries is believed to be life-threatening.

The 92-year-old man was struck at the intersection of 40th Street and 1st Avenue just before 11:30 p.m. Thursday.

The driver of a van was taken into custody by police but suffered a medical episode while at the 17th Precinct stationhouse, authorities said.

They transported him to the hospital, and detectives are now looking into the possibility that he had a medical episode while driving.

Firefighters secured the scaffolding and debris, and the Department of Buildings determined all damaged structures and buildings were structurally sound.