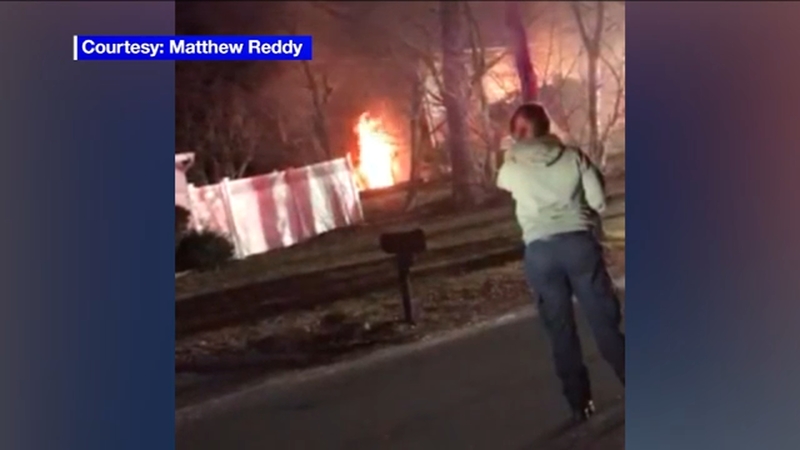 GORDON HEIGHTS, Suffolk County (WABC) -- A little girl about to celebrate her second birthday was killed when a fire tore through her Long Island home early Wednesday.

The victim was identified as 23-month-old Majesty Gerald, who authorities say became trapped in the basement with her older sister when the flames broke out at the house on Maple Lane in Gordon Heights around 3 a.m.

The fire appeared to start in the basement, officials said, and the sister was able to escape.

Nine members of an extended family were inside the residence at the time of the fire.

The child was pronounced dead at the scene after the blaze was extinguished.

A 34-year-old woman, a 57-year-old man, a 4-year-old girl and a member of Medford Fire Department were transported to area hospitals for treatment of minor injuries.

The five other family members were unharmed.

Cell phone video obtained by Eyewitness News shows a man and a woman racing up in a car and flying towards the burning home -- screams could be heard as they run towards the house.

Matt Reddy, who lives across the street, said the flames were shooting out of the basement of the home and then exploded through the top of the house causing windows to break.

"Everything started popping," he said.

Reddy said he could see Gerald's family members running around, screaming on the front lawn.

"The father pulled up and the cops had to tackle him before he went inside," Reddy recounted. "He was screaming about his daughter. And the mother was devastated. She was burned. She tried to get in."

Investigators believe Gerald's 4-year-old sister notified adults in the house about the fire.

At the scene on Wednesday afternoon, a man, who did not want to be identified, described himself as Gerald's uncle. He said his sister, Gerald's mother, is in shock at losing her daughter.

Gordon Heights Fire Chief Eric Lee said firefighters pushed as hard as they could to get into the basement, but the flames were too strong.

Lee said they were able to recover Gerald's body as the first floor began to collapse.

Lee said he is going to provide counseling to the members of the Fire Department who have been hit hard, as well, by Gerald's death.

"We're sorry for the family," he said. "They took the loss."

Lee said the Gordon Heights Fire Department has not had a fatal house fire in decades, if ever.

The Rev. Thomas Flud, of Community Baptist Church of Gordon Heights, said he has spoken with surviving family members and described them as distraught.

"Loss of a life is a loss of a life, especially for it to be a young child," he said. "Right now, we're just trying to make sense out of it."

Rev. Flud said the surrounding community and the church will be offering support to the family.

A preliminary investigation has determined the cause of the fire to be non-criminal in nature.

A person found her body inside a vacant warehouse at the Fulton Fish Market and called 911.