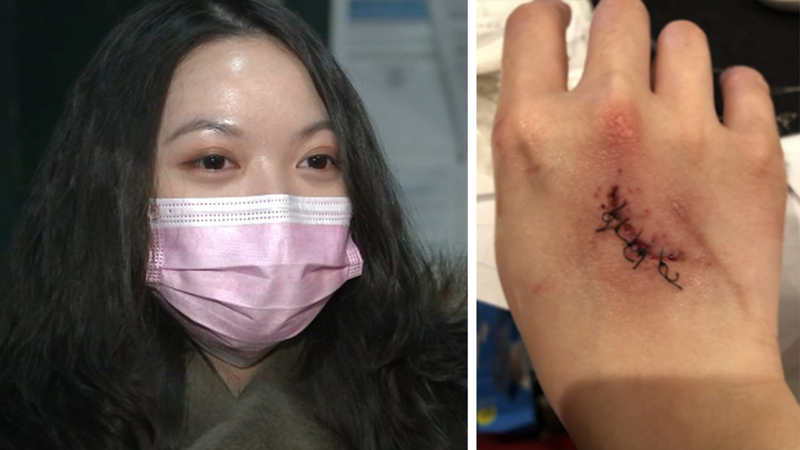 Woman slashed across hand while walking home in NYC

BEDFORD STUYVESANT, Brooklyn (WABC) -- Police are looking for a man who slashed a college student across the hand as she was walking home in Brooklyn.

The scars left behind are now healing. But a 25-year-old woman, who chooses to be identified only as Cindy, says it will be a while before she's fully recovered from an attack that has also left her emotionally wounded.

"I couldn't walk in the street at night alone anymore," Cindy said.

Police say they are looking for a man caught on surveillance, in connection with the February 28 assault near Dekalb Avenue and Skillman Street in Bedford Stuyvesant, Brooklyn.

Cindy says the suspect followed her as she walked home around 11 p.m.

Josh Einiger has more on a shooting in front of Brooklyn restuarant that left two people injured.

The local university student says she tried to change direction in attempt to derail the suspect, but he caught up to her.

"And then choke on my neck and saying be quiet -- be quiet I got a knife -- and I just start screaming," Cindy said.

It was during the scuffle that Cindy says the suspect cut her hand. She fought him off and ripped off his black mask.

"Once I took off his mask -- he ran away," she said. "He didn't tell me what he wants about money or anything."

Investigators tell us the suspect ran south on Skillman Street.

Residents are now being extra cautious and were upset to hear what happened.

But Cindy is counting her blessings and says she is the luckiest person alive.

The man wanted in this case is believed to be between his 20s and 30s.

Anyone with information in regards to this incident is asked to call the NYPD's Crime Stoppers Hotline at 1-800-577-TIPS.