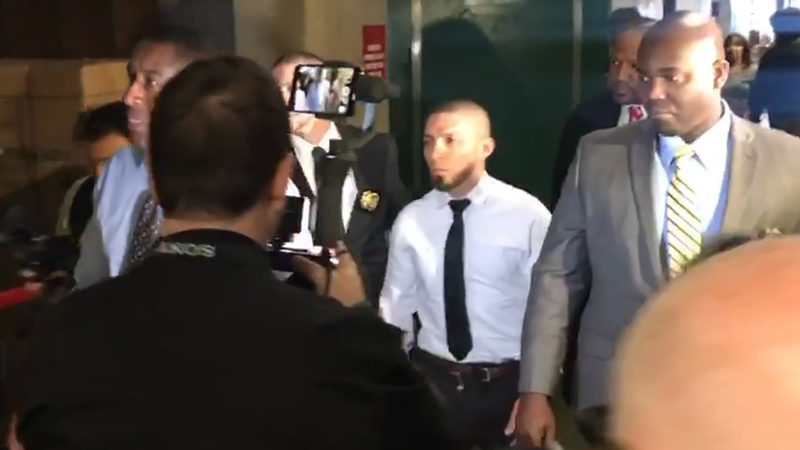 BROOKLYN, New York City (WABC) -- Brooklyn District Attorney Eric Gonzalez's Conviction Review Unit on Wednesday asked for the dismissal of 27 felony convictions and 63 misdemeanor convictions that were based on the work of an NYPD detective accused of framing suspects.

Former detective Joseph Franco has been indicted in Manhattan for perjury, official misconduct and other charges in connection with four incidents whereby he allegedly framed numerous individuals for making narcotics transactions.

A review by the Conviction Review Unit (CRU) did not uncover misconduct, but Gonzalez said he has lost confidence in cases where the detective was the essential witness.

"Knowingly and repeatedly framing innocent people obliterates the credibility of any police officer and proving perjury in such circumstances is rare," he said. "After a grand jury reviewed the evidence and indicted former Detective Franco, I have lost confidence in his work. His cases in Brooklyn are over a decade old, which limited our ability to reinvestigate them, but I cannot in good faith stand by convictions that principally relied on his testimony. Integrity and credibility are at the heart of the justice system and prerequisites for community trust."

After the request, Brooklyn Criminal Court Judge Keisha Espinal one by one vacated more than 50 drug convictions. Dozens more cases were dismissed later Wednesday by Judge Matthew D'Emic in a separate hearing.

Assistant District Attorney Eric Sonnenschein, the deputy director of the CRU, said Franco's allegedly criminal conduct could not have been known to prosecutors or defense attorneys at the time since it wasn't charged until years later.

"The people have not discovered the defendants' convictions were based on fabricated evidence or that the defendants are innocent," Sonnenschein said.

Court proceedings are expected to continue over the next few days. In all, 27 felony convictions and 63 misdemeanor convictions will be vacated.

The cases stemmed from arrests that happened when Franco was assigned to Brooklyn commands between 2004 and 2011. All but one of the 90 convictions were obtained by way of a guilty plea.

The CRU reviewed all convictions where Franco was involved, and cases where he was the primary undercover and his testimony was necessary for a potential hearing or trial were flagged for dismissal.

Defense lawyers and the court have been notified of the new allegations and the dismissals.

He is awaiting trial on both indictments and was fired from the NYPD in May 2020.

The Legal Aid Society, which represented many of the suspects, said we may never know the full extent of the damage Franco caused and lives he upended.

"It shows you the unbelievable ripple effect that one individual who wears a shield can have on lives of hundreds, if not thousands," said Aida Leisenring, a criminal defense attorney with Barket Epstein. "Overturning a wrongful conviction is not a substitute for justice, because the damage has already been done. Filing a lawsuit against the NYPD and receiving financial reparations for that, that's a step towards justice."

"Brooklyn DA Eric Gonzalez's premature decision to dismiss 90 cases in summary fashion despite an investigation by his office which failed to uncover anything improper, is baseless and irresponsible," Howard Tanner said. "This shocking and highly publicized decision has created a toxic atmosphere that is prejudicial to Mr. Franco's constitutional right to the presumption of innocence and a fair trial by an impartial jury. My client, a 20-year decorated former Detective with the NYPD, maintains his innocence and will mount an aggressive defense."