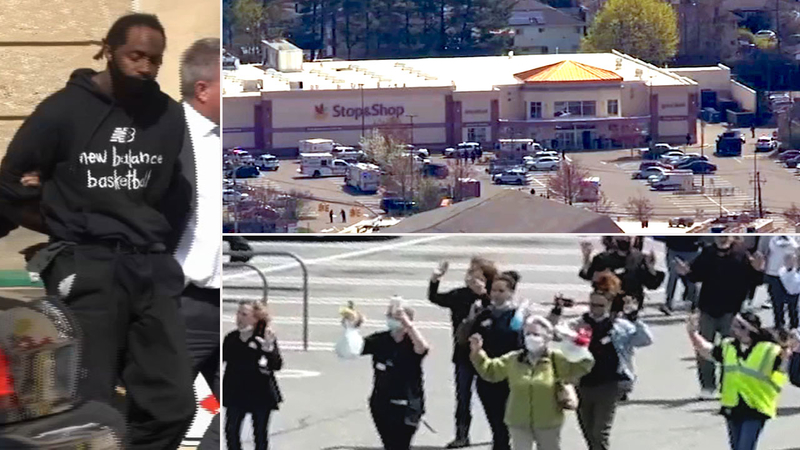 Gabriel Dewitt Wilson, 31, who authorities say has a history of mental illness and a violent past, was taken into custody Tuesday afternoon and appeared in court Wednesday morning.

Wilson was arraigned on one count of 2nd degree murder and four counts of attempted murder.

It was Tuesday at about 11:20 a.m. when prosecutors say Wilson walked into supermarket filled with customers.

Police say he went to the manager's office to talk about transferring to another location as a shopping cart attendant.

But for some reason, Wilson returned about 40 minutes later, police say, and opened fire seven times. Wishropp was fatally shot.

"He was taken too soon," said 13-year-old Dezirae Wishropp in tears. "The guy who shot him he doesn't know what he has caused."

Valanie Wishropp, 15, said her dad recently spoke with her about the possibility of retiring and moving to Florida, where his mother lives.

"He didn't want to now because of the job and now his life is taken," Valanie Wishropp said.

Kristin Thorne interviews the daughters of a father who was killed in Tuesday's deadly shooting at a Stop & Shop in West Hempstead.

His cousin said Wishropp, a father of seven, did not deserve this.

"He was an amazing, an amazing dad," said Fiona Morgan. "He was a strong pillar of our family."

As for those who were injured, a 50-year-old Bethpage man was shot three times: once in the face, by a bullet that grazed his cheek, and twice in the shoulder.

A 26-year-old Bay Shore woman was was shot once in the shoulder.

Both are expected to recover.

Two other 47-year-old women who were in the vicinity of the shooting were not struck.

Police say the .38 caliber handgun Wilson used has not been recovered.

Wilson is described by authorities as "a troubled employee" with complaints of having made unwanted advances to women that worked at the supermarket, bringing one gifts.

He was having disputes with the other workers, threatening them, and was brought into the manager's office several times.

He had requested a transfer from the West Hempstead location to Hempstead.

He was picked up twice in Nassau County for mental health crises, in 2016 and 2019

He is believed to have worked at Stop & Shop for the four years he has been in New York - two years in Long Beach and two years in West Hempstead.

Though hundreds of shoppers were in the store yesterday, none was injured.

Wilson was arrested a few hours after the shooting at a home on Terrace Avenue in Hempstead.

"Once convicted of the top count, he will face incarceration of 25 years to life in prison," Nassau County DA Madeline Singas said.