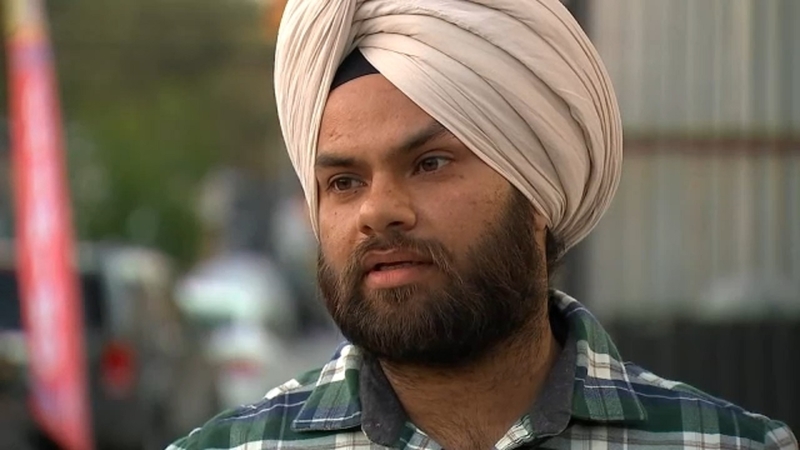 BROWNSVILLE, Brooklyn (WABC) -- A Queens man was attacked with a hammer while he was at work.

Police say the incident happened at a hotel in Brooklyn when a belligerent man randomly walked into the lobby.

The victim, Sumit Ahluwalia is from India and is from the religious Sikh faith. He came to the United States with his young family just three years ago.

"Obviously America is the best country that everyone dreams for," Ahluwalia says.

A mechanical engineer by trade, he is now the operational manager at the Quality Inn in Brownsville. He was working hard like he does every day, when on Monday morning, a man walked into the lobby, loud on the phone. When the front desk asked him if he needed help, things went south.

"He got mad - through the front desk window he spit on us," said Ahluwalia.

The man walked out of the hotel, and Ahluwalia walked outside as well and called security.

"When he saw me, he started running towards me," Ahluwalia said, "He put his hand in his pocket - I thought he was pulling out a gun. I got fear and went inside."

Surveillance video shows what happened inside.

Ahluwalia said the man said, "you're not my brother, you're not the same skin."

"He then pulled out the hammer and banged on my head saying 'I don't like you,'" added Ahluwalia.

Thankfully Ahluwalia was wearing his religious turban, but the attack, though not being called a hate crime, is causing an uproar in the South Asian community, and local activists like Japneet Singh are rallying for inclusion and a better understanding of the Sikh religion.

"This isn't the first time we've seen this - after 9/11, this is one of the highly targeted communities," said Assemblymember Jenifer Rajkumar.

As for Ahluwalia, he is back to work - but it is not the same.

"The last four days I go there, I fear somebody is coming from the back and going to bang on my head. I have a fear in my mind from that day," he said.

Police are not calling the attack a hate crime, but it remains under full investigation.

The suspect got into a dispute while dining inside the iconic restaurant at around 9:45 p.m.