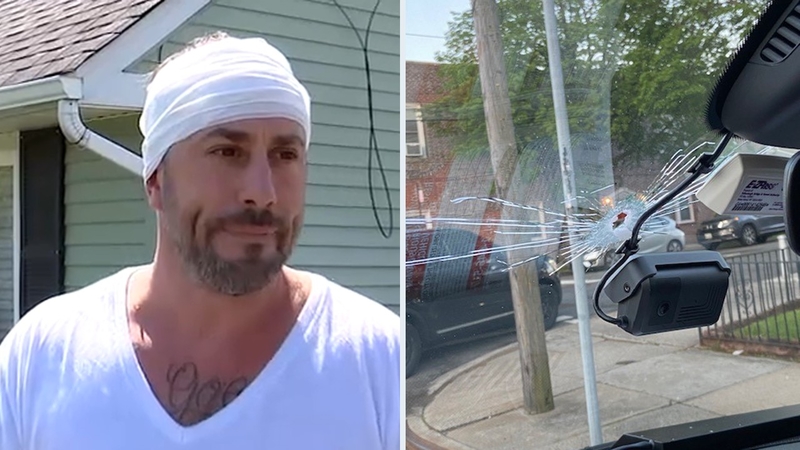 ST. ALBANS, Queens (WABC) -- A parking enforcement agent who was shot in the head while booting a car in Queens spoke on Tuesday with Eyewitness News in an exclusive television interview.

"There's guns everywhere," said Frank Tedesco, of Massapequa. "This is the Wild West in New York right now, it's crazy."

Tedesco, a father of three, recounted how the gunman squatted and aimed at him while he sat in his company van with a New York City marshal.

It happened while Tedesco was booting a car on Tioga Drive in the St. Albans section of Queens around 12:50 a.m. on May 7.

Tedesco said he saw the gunman standing on the corner.

"He had boxers on - no shoes, no socks, no shirt," Tedesco said.

Tedesco said he saw the gunman put two hands on the gun and take an aiming stance. He said the first bullet hit the front bumper of the van.

"That's what gave us that split second to start ducking because he was trying to aim," Tedesco said.

That bullet came through the front window, grazed Tedesco's head and ended up in Tedesco's headrest. Tedesco said as he kept his head lowered he heard another gunshot. He reversed down the entire block.

"Thank God there was a cop not even a block away," Tedesco said.

Police have not made any arrests.

Tedesco, who is also battling a rare eye cancer, said he will have to return to work soon.

"It's dangerous for us out there. Cops have bulletproof glass. We have nothing. We have just a van. We have no bullet proof vests," Tedesco said.

But he says he has no choice.

The victim was attending the vigil for another homicide victim when a gunman opened fire from a passing white sedan.