NYC mayoral candidates on the attack ahead of debate, primary 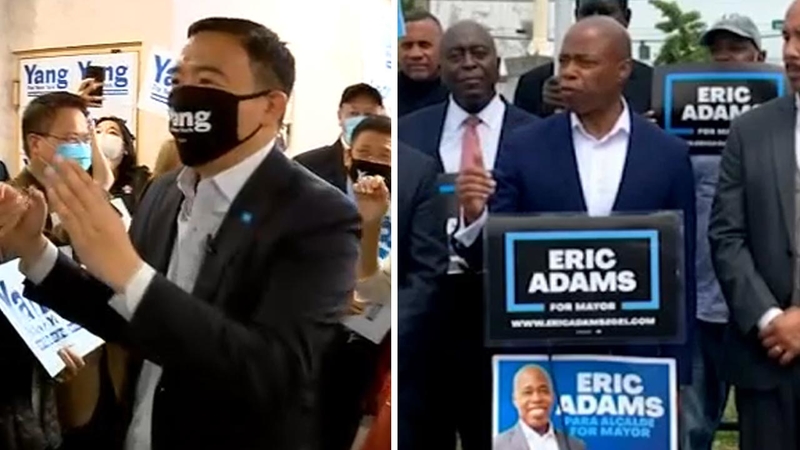 NYC mayoral race: Candidates on the attack ahead of debate, primary

NEW YORK (WABC) -- With the next mayoral debate looming on Wednesday, to be aired on WABC, the candidates in a crowded field are working to separate themselves from the competition.

Yang was on the attack, blasting the Brooklyn borough president and former police officer as the ultimate insider.

He also ripped current Mayor Bill de Blasio over future budget deficits that he says could cripple the city.

"And you know who's not going to breathe a word about it? Eric Adams," he said. "You know why? Because Eric Adams knows Mayor de Blasio is making calls for him right now, trying to keep things the same."

Adams hit back, questioning why Yang even remains in the race.

Adams tore into Yang for never voting in city elections and for going to a second home upstate when the pandemic first hit.

"Why didn't you participate in any of the municipal elections?" Adams said. "Why did you flee this city during our most darkest hour? We don't need a person that will run from the city. We need a city who's going to run the city."

Yang also went after former Sanitation Commissioner Kathryn Garcia, saying anyone who's worked for de Blasio for seven of the last eight years is not the change we need.

On CNN, she said she's different from the rest of the field.

"I'm not a politician, and I'd say actually he is a politician and most of my competitors are politicians," she said.

She hit back at Yang, saying he's focused on her because she's rising in the polls.

WABC-TV will host the next debate for the New York City mayoral race in person on June 2.

The fact that all three are going after each other should surprise no one, as they're at the top of most polls -- and all of them are considered middle-of-the-road moderates.

They know that in order to win, they need to take out their like-minded opponents come Primary Day, now just three weeks away.

The debate among the top eight Democratic candidates for New York City mayor will take place Wednesday at 7 p.m. The first hour will air on Channel 7 and the second hour will take place on our streaming platforms, our website and digital channel 7.2.