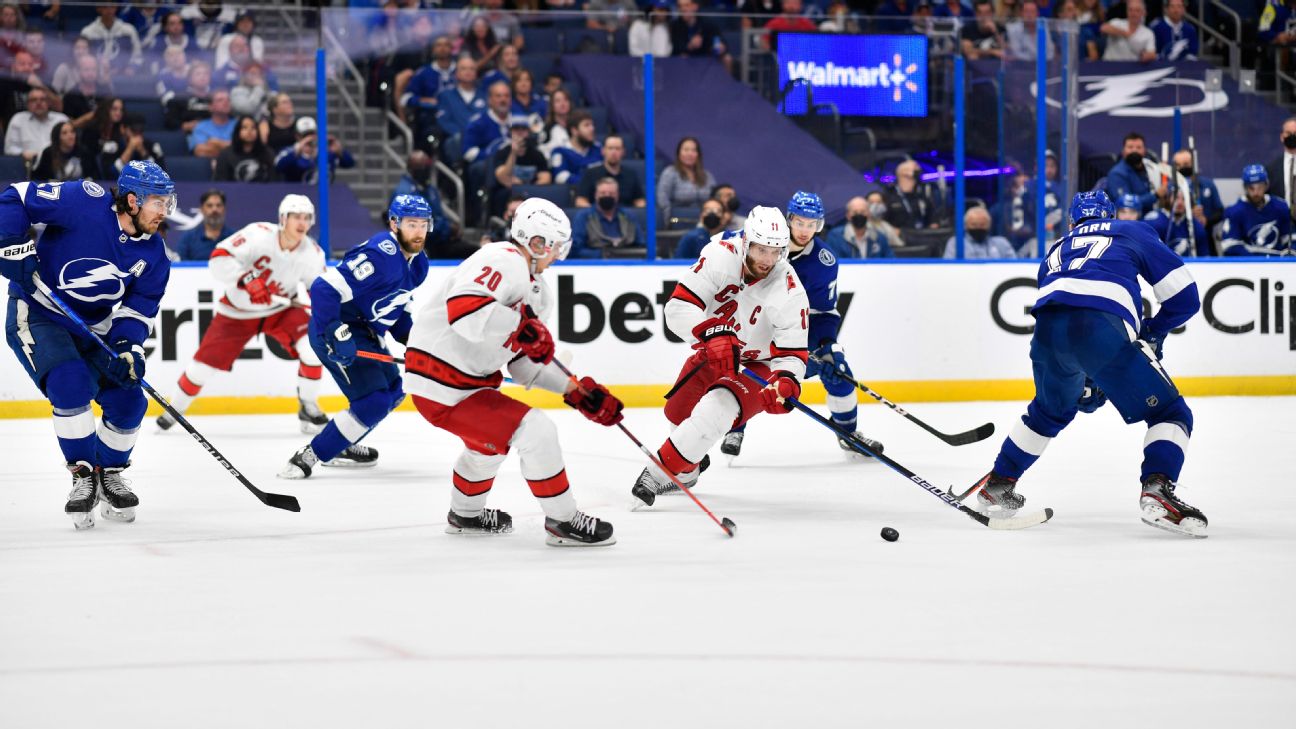 The Tampa Bay Lightning have a chance to eliminate the Carolina Hurricanes, though playing in front of their home crowd may be the boost the Hurricanes needs to keep their season alive. Meanwhile, the Colorado Avalanche will try to find their game again in Denver after the Vegas Golden Knights put on a show during Games 3 and 4 at T-Mobile Arena.

And last night? The Montreal Canadiens became the first team to punch their ticket to the Stanley Cup semifinals -- just as we all predicted, right? -- while the New York Islanders pushed the Boston Bruins to the brink of elimination.

The Lightning have a chance to close out the Hurricanes, but it's never easy to win at PNC Arena. The Canes won 20 of 28 regular-season games at home, and three of five in the playoffs. For Carolina, it's essential to stay disciplined, as the Lightning's power play is on fire. Tampa Bay is 6-for-14 (a whopping 42.9%) in this series. Carolina may be getting a boost as Nino Niederreiter -- who has missed all four games in this series -- was back on the ice practicing on Monday. Carolina coach Rod Brind'Amour sounded more optimistic about Niederreiter than his other two injured forwards, Vincent Trocheck and Warren Foegele, who remain game-time decisions.

"You know there is no tomorrow. This is it. You've got to lay it all on the line," Brind'Amour said. "I'm sure we'll give it everything we've got. I've got no doubt in this group."

Colorado's top line of Nathan MacKinnon, Mikko Rantanen and Gabriel Landeskog combined for six goals and 24 shots on goal in Games 1 and 2. When the series shifted to Vegas, the Golden Knights had an answer. Colorado's top line has scored just one goal since, with just 12 shots on goal combined in the two games. Captain Gabe Landeskog hasn't put a puck on net in the past two games. Vegas' top line of Mark Stone, Chandler Stephenson and Max Pacioretty has done a good job of shutting them down, but even against the Golden Knights' second line (centered by the defensively responsible William Karlsson) Colorado's top line is struggling.

"I think that they're frustrated, for sure," coach Jared Bednar said. "It's tight checking right now. They're not just dealing with one line, they're dealing with multiple lines." MacKinnon, Rantanen and Landeskog can change their fortune at home, where the Avs have the benefit of last change.

A wild game in Boston. First, the weird: Semyon Varlamov has made six playoff starts. He's allowed a goal on one of the first three shots he faced in five of them, including on Monday. Varlamov rallied after that for 40 saves, as the Bruins applied a ton of pressure, controlling 68% of the shot attempts at 5-on-5 while outshooting New York 44-19.

Mathew Barzal scored for the third straight game as the Isles' power play (3-for-4) made the difference. That didn't please Boston coach Bruce Cassidy, but more on that below. The Bruins made a late push to nearly erase a 5-2 deficit, and got two goals from David Pastrnak and a gorgeous one from Brad Marchand, but it wasn't enough. Cassidy pulled Tuukka Rask in the third for Jeremy Swayman, but said after the game it was injury-related. Rask is expected to be OK for Wednesday's Game 6. Full recap

The Jets played pretty poorly this entire series. Yes, they were banged up and seemed rattled after Mark Scheifele's four-game suspension, but this was a pretty poor showing. Montreal, meanwhile, has honed in on a defensive identity to keep this improbable run alive. The Habs have now won seven straight games, and never trailed during the entire second round. It's wild to think that Cole Caufield was a healthy scratch to start this series. Not only does the 20-year-old score goals, he can set up some pretty ones too, like the overtime series winner:

The Habs now get some rest as they'll face the winner of the Avs vs. Knights series, which is tied 2-2 heading into tonight's matchup. Full recap

The winger signed a four-year, $17 million contract with the Canadiens this past offseason, and Montreal wouldn't be where it is today if not for him. Toffoli was perhaps the Habs' best forward this season, and clinched the second-round series with the overtime winner on Monday.

With a pretty assist, and an important goal that put New York up 2-0, the veteran forward showed up when his team needed him most. Bailey is writing his own Islanders legacy, though the following list is just a reminder of how dominant Mike Bossy and Bryan Trottier were during the dynasty era.

The 23-year-old defenseman entered Monday's game with one career NHL goal, which he scored in March of the regular season. With his team backed into a corner, down 2-0 in the second period and on the verge of a sweep, Stanley scored a pair of goals to tie the game. While the Jets were eliminated in overtime, it was a big night for the young blueliner.

Vent of the day

Officiating has become a storyline in these playoffs. It began when Connor McDavid didn't draw a single call during four games against the Jets. It has continued with several head coaches -- Craig Berube, Rod Brind'Amour, Jon Cooper -- voicing displeasure about calls (or lack thereof) for their team. On Monday, Boston's Bruce Cassidy joined the chorus. And he took shots not just at the officials, but at the Islanders and their identity.


"We're playing a team that has a very well-respected management and coaching staff. But I think they sell a narrative over there that it's more like the New York Saints, not the New York Islanders," Cassidy said. "They play hard and they play the right way, but I feel we're the same way. And the exact calls that get called on us do not get called on them, and I don't know why."

The Islanders scored three goals on four power-play opportunities, a huge reason they will return home with a 3-2 series lead. The Islanders were only called on two penalties themselves.

"They've done a great job selling that narrative that they're clean," Cassidy said. "They play a hard brand of hockey. But they commit as many infractions as we do. Trust me. It's [just] a matter of calling them."

As Barry Trotz pointed out, New York was one of the least-penalized teams in the regular season. The Isles finished 29th by averaging only six minutes, 36 seconds of penalty kill time per game. That said, ask anyone in hockey and they'll tell you this: regular-season hockey has a different intensity than playoff hockey, and they are not officiated the same.

The Islanders entered the third period with a two-goal lead Monday night, and held on for the win.

Under coach Barry Trotz, the Islanders' record entering the third period with exactly a two-goal lead:

Fit of the day

The second David Pastrnak arrived at the rink looking this minty fresh, you knew he was set for a big night.

One game after clanging it off the post on an open net, Pasta showed up with two goals for Boston. 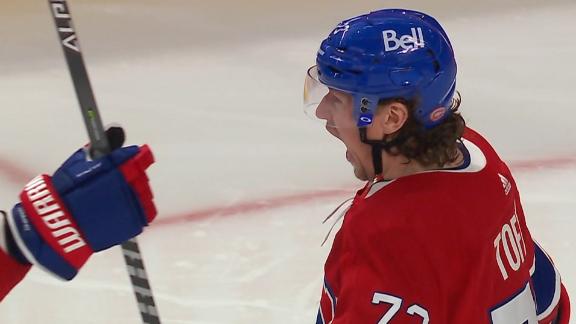 Tyler Toffoli completes Canadiens' sweep with an OT winner
Cole Caufield passes it in front to Tyler Toffoli, who buries the Jets with an overtime winner to complete the Canadiens' four-game sweep. 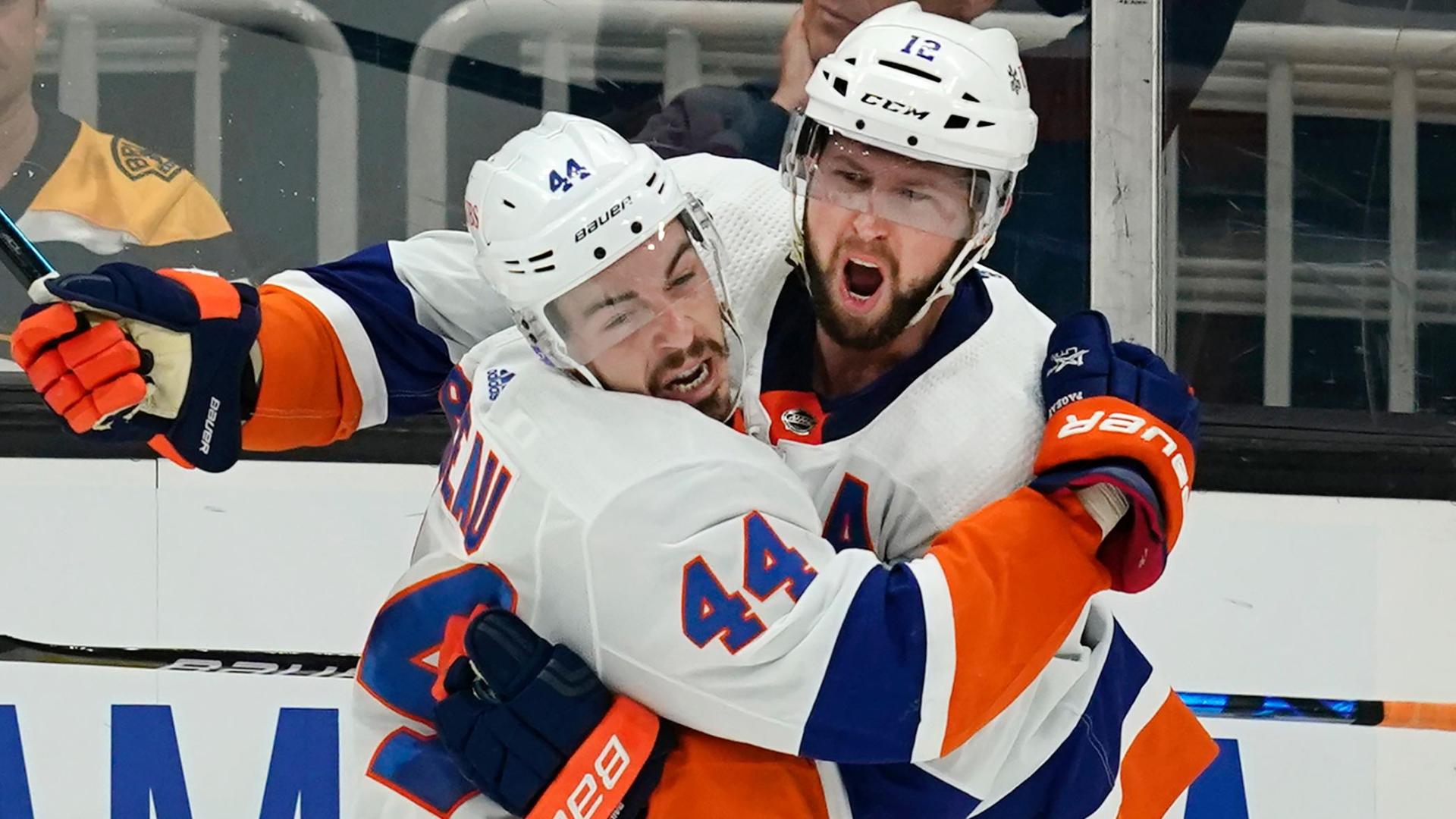 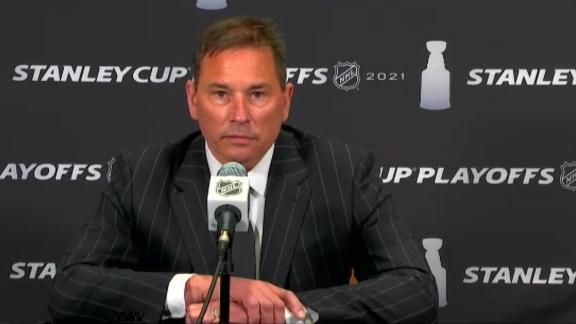