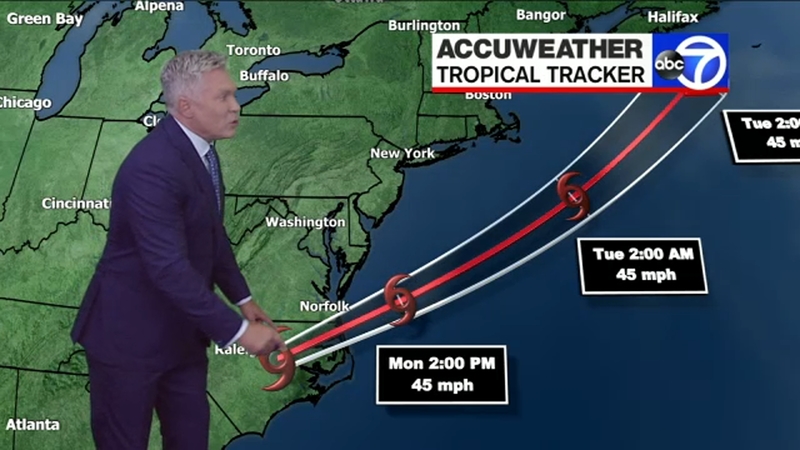 Tropical Storm Claudette moves up along the coast

NEW ORLEANS (WABC) -- Rip currents are the primary concern for the New Jersey and New York coasts as Tropical Storm Claudette moves out to sea well to the south of the area.

The storm was moving east-northeast and out to sea, well south of the New York area.

Still, Claudette could stir up strong rip currents for beachgoers and caution is urged through Tuesday.

Claudette has returned to Tropical Storm strength as it continues to move east. The storm was blamed for 13 deaths in Alabama.

Sheriff Heath Jackson in Escambia County said a suspected tornado "pretty much leveled" a mobile home park, toppled trees onto houses and ripped the roof off of a high school gym. Most of the damage was done in or near the towns of Brewton and East Brewton, about 48 miles (77 kilometers) north of Pensacola, Florida.

"It kind of affected everybody," Jackson said. "But with those mobile homes being built so close together it can take a toll on them a lot more than it can on houses that are spread apart."

There were no immediate reports of serious injuries or deaths. Photos of the Brewton area shared on Facebook show toppled trees, including one that landed on a house, as well a long stretch of debris that a local news outlet said was from a badly damaged trailer park.

Damage from the storm was also felt in north Florida, where winds - in some cases reaching 85 mph (137 kph) - caused an 18-wheeler to flip on its side.

WATCH: Weather Or Not with Lee Goldberg - a new series now available on our connected TV apps for Fire TV, Roku, Apple TV and Android

Separately, Tropical Storm Dolores made landfall on Mexico's west coast with near-hurricane force. As of Saturday night, it was a depression located about 140 miles (225 kilometers) north-northwest of Guadalajara, Mexico. Its maximum sustained winds were clocked at 30 mph (45 kph), and it was moving north at 21 mph (33 kph).

Heavy rainfall of 6 to 10 inches (about 15 to 25 centimeters) was expected across the southwest and western coastal areas of Mexico throughout the weekend. Forecasters were warning of the potential for flash flooding and mudslides.