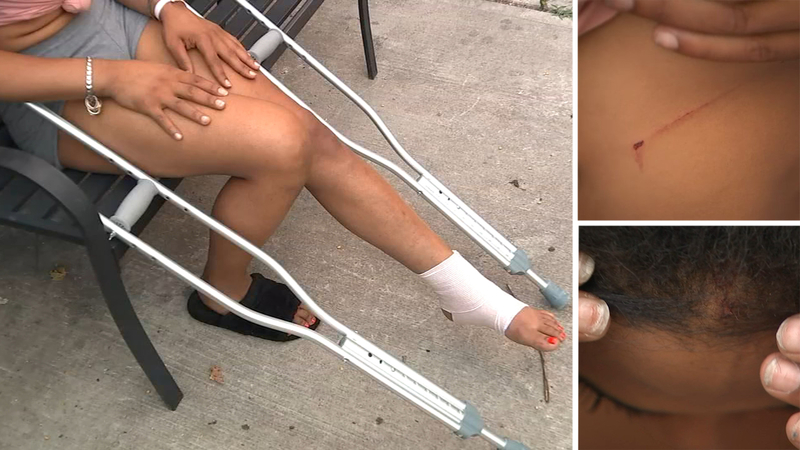 LOWER MANHATTAN, New York (WABC) -- Police are investigating a possible bias attack after a transgender woman was harassed and stabbed by a suspect with a screwdriver at a Manhattan train station.

According to officials, the incident happened just before 12:30 p.m. at the Broadway and Fulton Street subway station in Lower Manhattan.

They say the victim Nina Grey, who identifies as a transgender woman, entered the station and boarded a southbound A train, when a male suspect made an anti-gay remark towards her while holding a screwdriver in his hand.

"As soon as I took my seat, in that split second I was being called a (expletive) trans," Grey said.

Grey says the man came at her with a screwdriver as the train pulled into the Fulton Street stop.

She says she used mace on him, but he followed and attacked, leaving her wounded from head to toe before the suspect got back on the A train and fled.

It broke a 24-hour period of calm in the New York City subway system, recently besieged by violent crime.

Transit officials on Wednesday, announced that increased patrols provided by the NYPD seemed to have made an impact, with violent assaults down more than 50% in the past two weeks.
EMBED More News Videos

"We have seen a downward trend which is great, but it is not sufficient to make us take our foot off the pedal we have got to get to a point where customers feel comfortable in the system," MTA Chief Safety Officer Pat Warren said.

Grey said she already felt uncomfortable as a trans woman, which is why she was carrying the mace to begin with.

In her case , after a passer-by intervened, her attacker fled.

"I just wish that all of this hate could stop. Not just in the LGBT community, but all across the board," Grey said. "Because people lives matter not just trans, Black, Hispanic, Asian lives -- people's lives matter and I think that's the point people matter."

This happened so recently cops have yet to put out video or even a good description of the suspect.

They describe the suspect as a man in his 40's, wearing a white do-rag.

No arrests have been made and the incident is being investigated as a potential bias crime.