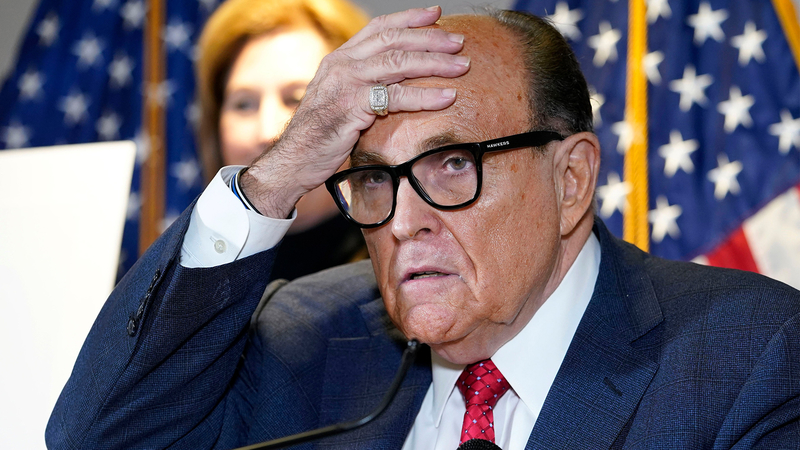 A committee with The Supreme Court of the State of New York, Appellate Division, First Judicial Department said that Giuliani "communicated demonstrably false and misleading statements to courts, lawmakers and the public at large in his capacity as lawyer for former President Donald J. Trump and the Trump campaign in connection with Trump's failed effort at reelection in 2020."

The document went on to say, "These false statements were made to improperly bolster respondent's narrative that due to widespread voter fraud, victory in the 2020 United States presidential election was stolen from his client. We conclude that the respondent's conduct immediately threatens the public interest and warrants interim suspension from the practice of law, pending further proceedings before the Attorney Grievance Committee (sometimes AGC or Committee).

The Court then laid out what Giuliani is no longer permitted to do in the state of New York. "It is further Ordered that respondent is commanded to desist and refrain from the practice of law in any form, either as principal or agent, clerk or employee of another; that respondent is forbidden to appear as an attorney or counselor-at-law before any court, judge, justice, board or commission or other public authority; that respondent is forbidden to give another an opinion as to the law or its application or advice in relation thereto, all effective the date hereof, until such time as disciplinary matters pending before the Committee have been concluded and until further order of this Court."

The suspension is temporary and pending the outcome of a formal disciplinary hearing.

Giuliani unloaded on his license suspension on his WABC-AM radio show Thursday, saying "the only thing that happened is January 6th. The statements they are complaining about came after January 6th. What do they retrospectively create January 6th. And what the heck do I have to do with January 6th? Nothing."

He went on to say, "I did not commit any crimes. I defended my client. And I defended by client in a way in which the bar association should give me an award. I defended an unpopular client, I've been threatened with death for it, I've had a good deal of my income taken away. I've lost friends over it. Isn't that what a lawyer is supposed to do?"

"We are disappointed with the Appellate Division, First Department's decision suspending Mayor Giuliani prior to being afforded a hearing on the issues that are alleged. This is unprecedented as we believe that our client does not pose a present danger to the public interest. We believe that once the issues are fully explored at a hearing Mr. Giuliani will be reinstated as a valued member of the legal profession that he has served so well in his many capacities for so many years."

"Can you believe that New York wants to strip Rudy Giuliani, a great American Patriot, of his law license because he has been fighting what has already been proven to be a Fraudulent Election? The greatest mayor in the history of New York City, the Eliot Ness of his generation, one of the greatest crime fighters our Country has ever known, and this is what the Radical Left does to him. All of New York is out of control, crime is at an all-time high-it's nothing but a Witch Hunt, and they should be ashamed of themselves. TAKE BACK AMERICA!"

Giulini has a court hearing Thursday afternoon in Washington, DC on a defamation lawsuit brought by vote management company Dominion Voting Systems, which is suing him and others for statements they made alleging election fraud.

It's not yet known if he may appear, or his lawyers will appear for him.

Separately his son Andrew Giuliani, who is running for governor, is "infuriated."