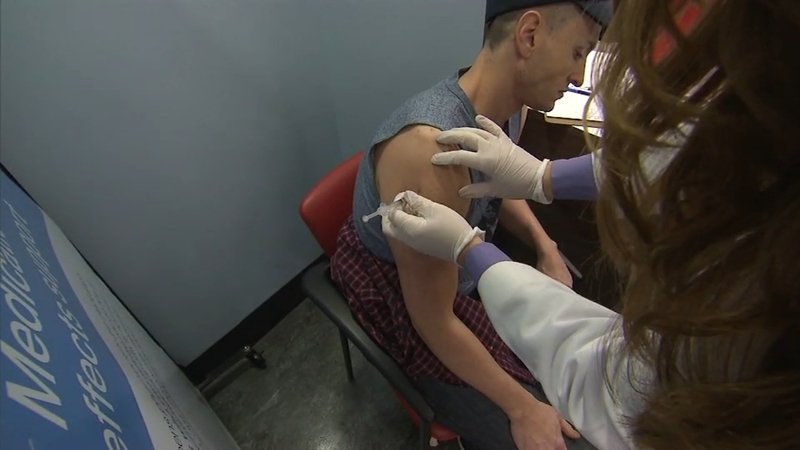 Local officials have the right to re-implement COVID restrictions

Marriage bureaus in the city are opening on Monday for in-person weddings. However, there was a warning on Sunday from the U.S. Surgeon General saying local officials have the right to reimplement COVID restrictions as cases fueled by the contagious Delta variant surge.

European Union's vaccination campaign catching up with the United States

The European Union's vaccination campaign is catching up with the United States.

European officials vaunted figures from Our World in Data showing that 55.6% of EU citizens have had at least one dose, compared to 55.4% in the U.S. It was the first time the EU figures outpaced those across the Atlantic.

Our World in Data says the U.S. still has a higher proportion of fully vaccinated people. The figures are 48% in the U.S. versus 42% in the EU. Britain and some other countries are moving faster than either.

The EU took a more cautious approach to vaccines initially and got off to a slower start than the U.S.

EU markets commissioner Thierry Breton noted that half of vaccines made in the bloc have been exported to more than 100 countries overall. But extreme global vaccine inequalities remain. Only a small fraction of vaccines reaching the poorest populations in Africa and elsewhere.

First positive COVID tests for athletes in Olympic Village
Two South African soccer players have become the first athletes inside the Olympic Village to test positive for COVID-19, with the Tokyo Games opening on Friday. Organizers confirmed the positive tests on Sunday but didn't identify the athletes other than to say they were non-Japanese. The South African Football Association later confirmed there were three COVID-19 cases in its delegation - two players and a video analyst.

Cases on rise in all 50 states for 1st time in 6 months
For the first time in 6 months, the number of COVID cases is rising in all 50 states. Health officials say most of the cases are happening with people who are not vaccinated. They say the vaccination rates are down about 85 percent since mid-April. In part of California, officials have re-instated a mask mandate.

No plan for NYC to return to mask mandates, Mayor Bill de Blasio says
New York City Mayor Bill de Blasio said Friday that there are no plans to return to mandatory mask wearing like what was recently re-enacted in Los Angeles County, as the highly contagious Delta variant of the novel coronavirus spreads. De Blasio pointed to the hospitalization rate of .31 per 100,000 people.
"We do not have a plan to change course at this point, but we are going to watch the data constantly to see if any adjustments are needed," he said. "(It's) a very low rate, and it's stayed low in the recent weeks."

Yankees-Red Sox game on for Friday after testing shows no new COVID cases
The Yankees' post-All-Star break opener against the Boston Red Sox had to be postponed because of positive COVID-19 tests among six New York Yankees players, though as of now, the teams plan to play Friday. Pitchers Jonathan Loaisiga, Nestor Cortes Jr. and Wandy Peralta tested positive, with pending tests for Aaron Judge, Kyle Higashioka and Gio Urshela later being confirmed as positive. ESPN's Jeff Passan reports no new positive cases have been reported since Thursday afternoon, and players underwent one more round of testing Friday afternoon before first pitch. Following those tests, Major League Baseball said the game will proceed as scheduled. The postponement of Thursday's game will be made up as part of a split doubleheader at Yankee Stadium on Tuesday, August 17.
Monster Jam returns as MetLife Stadium's 1st 100% capacity event since pandemic began
Despite concerns over rising COVID cases, Monster Jam returns to New Jersey Saturday as MetLife Stadiums first 100% full capacity event since the pandemic began. The event will have the largest capacity in the Tri-State Area in well over a year, with an expected 40,000 in attendance. Spectators will not be required to wear masks or show proof of vaccination. Tailgating will also be allowed. Concessions will be open, and while masks are recommended, it is only a recommendation.

NY lawmaker against mandatory COVID-19 vaccines for colleges, universities
A Republican lawmaker is voicing her opposition to mandatory COVID-19 vaccinations at New York colleges and universities. Assemblywoman Jodi Giglio (R-Riverhead) held a press conference Friday to speak out against the plan to require all students attending state colleges and universities this fall to take the vaccine as a requirement for enrollment.
"With what we now know about the virus and the necessity for vaccinating young people, students should not be forced to choose between getting the shots or attending college," Giglio said. "The vaccines are still considered experimental, and we should not be forcing them on this extremely low-risk population."

Woman goes viral after getting kicked off cruise ship over positive COVID test
A woman from the Bronx went viral for video she took while being booted from a cruise over a positive COVID-19 test. Laura Angelo says it was all a mistake, but cruise lines have strict measures in place to protect passengers.

Citing continued increases in transmission of COVID-19, the Los Angeles County Department of Public Health is re-implementing a mandate requiring residents to wear masks while indoors, regardless of their vaccination status. The county previously only recommended mask-wearing indoors. The new mandate will take effect at 11:59 p.m. Saturday night, officials announced Thursday.
NYC vaccination rates by zip code
There are about a dozen communities in the New York City area where three out of four people have not been vaccinated yet. 7 On Your Side Investigates created a map where the darkest colored zip codes have the most vaccinated New Yorkers and the lightest, the least.