NFL training camp updates: Giants, Browns among many teams joining in on fun at joint practices 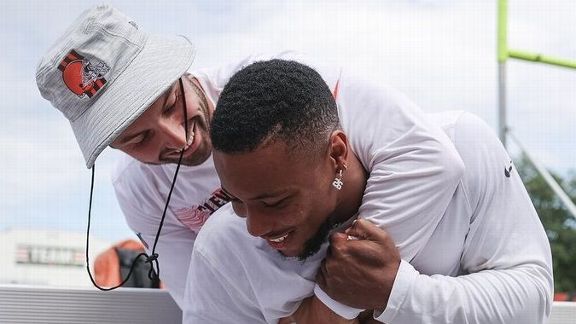 Cleveland Browns quarterback Baker Mayfield and New York Giants running back Saquon Barkley were spotted hanging out together, but their friendly camaraderie ended once their teams took the field for joint practices Thursday. Cleveland and New York certainly aren't the only teams squaring off this week during 2021 NFL training camps.

Among other teams taking the same field Thursday are the Tennessee Titans at the Tampa Bay Buccaneers, the New York Jets at the Green Bay Packers, the San Francisco 49ers at the Los Angeles Chargers, the Las Vegas Raiders at the Los Angeles Rams, the Atlanta Falcons at the Miami Dolphins and the Baltimore Ravens at the Carolina Panthers.


NFL Nation reporters share plenty of insight from those practices, including the physical skirmishes in Tampa, the Chargers' circus catches and the Broncos' competition at wide receiver.

Jump to the best of the day:

Top NFL news of the day

New York defensive end Carl Lawson, the team's biggest free-agent signing from the offseason, was carted off the field Thursday with a ruptured left Achilles tendon. The injury happened during a red zone period in a joint practice between the Jets and Green Bay at the Packers' facility. Lawson, whom the Jets were counting on to be their primary edge-rushing threat, will miss the 2021 season.

Tempers flared on Day 2 of joint practices between the Buccaneers and Tennessee in Tampa, resulting in five altercations that had to be broken up despite both Bucs coach Bruce Arians and Titans coach Mike Vrabel expressing zero tolerance for fighting before the practices. "A lot of grown men competing with emotion. Things happen. Just got to protect your brothers," said Bucs inside linebacker Devin White.

NFL quotes of the day

Cincinnati Bengals running back Joe Mixon is among those who believe quarterback Joe Burrow is on an upswing following a rocky start to training camp. "I feel like he's definitely making that turning point and getting very, very confident in his play, as he should," Mixon said in an interview with the team website on Thursday. "Because he's everything as advertised." -- Ben Baby

The "Help Wanted" sign is still out at left tackle. With second-round draft pick Teven Jenkins sidelined indefinitely following back surgery, the Chicago Bears added veteran Jason Peters to the practice mix on Thursday. Peters signed a one-year deal with Chicago to compete for the starting left tackle spot that has been vacant since camp opened. Peters, 39, is by far the most experienced member of the group, but is he in football shape? Only time will tell. Another left tackle candidate is fifth-round draft pick Larry Borom, who returned to practice on Thursday after spending time in the NFL's concussion protocol. -- Jeff Dickerson

The Carolina Panthers broke training camp at Wofford with five interceptions, two by rookie defensive tackle Daviyon Nixon, in a joint practice with the Baltimore Ravens. That was a good sign for a defense that had seven picks all of last season and made it an emphasis during the offseason to improve in that category. To be fair, the Ravens were missing five of their top six receivers and two starting tackles. -- David Newton

Detroit Lions running back D'Andre Swift and Pro Bowl tight end T.J. Hockenson have both been ruled out of Saturday's preseason game against the Pittsburgh Steelers, per coach Dan Campbell. Swift continues to fight through a nagging groin injury but returned to practice for a portion of drills, as did Hockenson, whose injury has been described as "minor." The thought is to ramp up Hockenson for next week as the team is playing it safe. Detroit will also sit defensive end Michael Brockers against Pittsburgh. -- Eric Woodyard

The San Francisco 49ers are in town for joint practices Thursday and Friday. Be on the lookout for an interesting matchup between Chargers wide receiver Keenan Allen and current 49ers cornerback and former Chargers teammate Jason Verrett (who is now wearing No. 2, not 22). -- Shelley Smith

In a rare scene at NFL joint practices there were no physical skirmishes between the 49ers and Chargers on Thursday. But that didn't stop the verbal altercations. Niners coach Kyle Shanahan had a pair of interesting interactions with Chargers linebacker Kyzir White. The first time happened when White was loudly talking trash after a one-on-one pass-blocking drill. The second came when White took San Francisco running back Raheem Mostert to the ground in team drills. "He was excited, sometimes they get excited," Shanahan said. "I told him to save his energy a little bit." After talking to White following his tackle of Mostert, Shanahan said White was understanding and practice went on as scheduled. -- Nick Wagoner

Thursday's practice was a reminder of one thing when it comes to fourth-year tight end Robert Tonyan: He never drops a ball. OK, well he actually did drop one in a game. One. It came in Week 17 of the 2018 season (his first year on an NFL roster). Since then, he has had 74 balls thrown his way without a drop in regular-season and playoff games. In Thursday's joint practice against the New York Jets, Tonyan snared a 30-yard touchdown from Aaron Rodgers on a seam route like he had Velcro on his hands. His sure-handedness didn't happen by accident. Tonyan said that he does hand and finger exercises all the time with "little finger bands so when I'm just sitting in meetings I have little finger bands or little sort of squeezers." No wonder Tonyan caught 11 touchdown passes last season to tie Kansas City's Travis Kelce for the league lead among tight ends. -- Rob Demovsky

The Denver Broncos' quarterback competition has overshadowed most storylines in training camp, but as the Broncos wrapped up their last camp practice open to fans Thursday, it was again clear just how competitive the battle for the last spots on the depth chart at wide receiver are going to be. Courtland Sutton, Jerry Jeudy, KJ Hamler and Tim Patrick have split most of the snaps with the starting offense throughout camp. That puts Diontae Spencer, Trinity Benson and Tyrie Cleveland potentially in the position of battling for two spots if the Broncos stick to their roster history. The team has kept six wide receivers on the opening-week roster in each of the past seven years and has not kept more than six on any Week 1 roster over the past two decades.

Spencer has been a limited participant on offense over the past two seasons but has been the team's primary returner. Cleveland made the roster in 2020 as an undrafted rookie and has shown his value as a reserve as well as on special teams. But Benson might be one of the team's most improved players and had two touchdown catches in the preseason opener. It's why some teams who feel a little light at the position will likely give the Broncos a call or two before Aug. 31, when rosters go to 53 players. -- Jeff Legwold

The Cleveland Browns got the best of the Giants in the first of two joint practices. With Odell Beckham Jr. still working his way back from his knee injury, Browns teammate Jarvis Landry opened the day by taking it to OBJ's former team with a series of receptions, including a one-handed stab over the middle.

Seattle Seahawks offensive coordinator Shane Waldron had to love one play in particular from Thursday's practice. QuarterbackRussell Wilson faked a toss to the right, then quickly fired a throw back to his left to DK Metcalf, who showed off his track speed as he outraced several defenders to the end zone for a 50-yard touchdown. The new offense that Waldron is installing places more emphasis than before on shorter, quicker throws designed to get the ball out of Wilson's hands and keep defenses honest. Dink and dunk, you say? Not if wide receivers can rack up yards after the catch and create big plays with the ball in their hands like Metcalf did Thursday. -- Brady Henderson 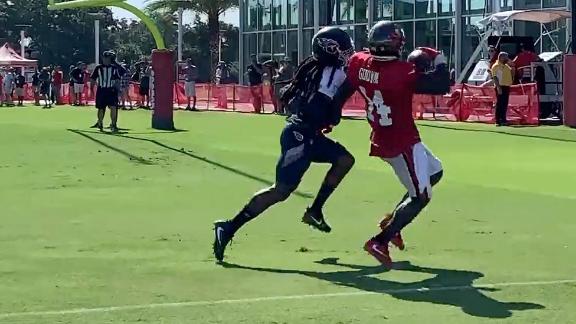