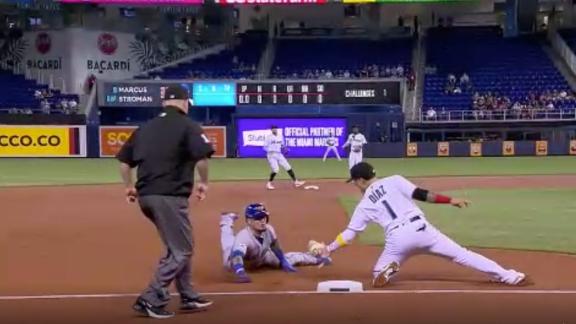 Javier Báez homered and doubled for the Mets, who began the day four games behind NL East leader Atlanta and 4 from the second wild card.


"You just have to come back the next day and try again," Báez said. "That's why you go by day by day, pitch by pitch. It's all you can control. We'll see what happens this next week."

Chisholm drove a 97 mph fastball from Jeurys Familia (9-4) into the upper deck seats for his 15th homer. Chisholm also had an RBI grounder in the sixth.

"I've faced Familia before, I know he throws hard," Chisholm said. "I was just looking for a pitch up. He got it up and I got all of it."

The blast was measured at 402 feet, a distance Chisholm and Miami manager Don Mattingly questioned.

"That was a beautiful swing and I'm not sure I haven't seen a ball go further than that here in this building," Mattingly said.

With the score 2-all, New York wasted Pete Alonso's leadoff triple against reliever Anthony Bender in the eighth. Bender retired Báez and J.D. Davis on groundouts with the infield drawn in.

"You feel pretty good with Báez coming in to hit there and the way he's swinging the bat," manager Luis Rojas said. "It didn't happen. We expect the guys to be better as we move forward from this game."

Dylan Floro pitched a perfect ninth for his ninth save.


The Marlins tied it at 2 in the seventh around three infield hits and a throwing error by reliever Brad Hand.

Starter Marcus Stroman was lifted after allowing Sandy León's one-out single and Hand gave up Isan Díaz's single. Mets catcher James McCann then threw out pinch-runner Alex Jackson at third when a pitch caromed to the backstop, with Díaz advancing to second on the play.

Pinch-hitter Lewis Brinson beat out a dribbler near the mound and Hand's throw got past Alonso at first base, allowing a run to score.

Stroman allowed one run, four hits and struck out seven in 6 1/3 innings. After sitting out last season, Stroman became the first pitcher to reach 30 starts in 2021 with his outing Thursday.

"I do everything I can to put my team in the position to win when I'm out there," Stroman said. "When the manager calls me, I'm done."

Báez hit a two-out double and scored on two wild pitches from Miami starter Jesús Luzardo to give New York a 1-0 lead in the first.

The Mets increased their advantage on Báez's 29th homer in the third. He hit Luzardo's curveball over the wall in center field, admiring the 438-foot shot before he rounded the bases.

The two hits by Báez were the only ones allowed by Luzardo in 5 2/3 innings. He struck out eight and walked four.


Before the game, both teams stood alongside their dugouts during a moment of silence and brief video tribute remembering the 20th anniversary of the 9/11 attacks in New York, Washington, D.C., and Pennsylvania. Members of the South Florida rescue team, which participated in the recovery effort following the attacks, also were recognized.

Marlins: RHP Pablo López (right rotator cuff strain) has been playing catch with the anticipation of progressing to a bullpen session in the coming days.

Mets: RHP Tylor Megill, 2-4, 4.20) will start the opener of a three-game series against the New York Yankees Friday at Citi Field.