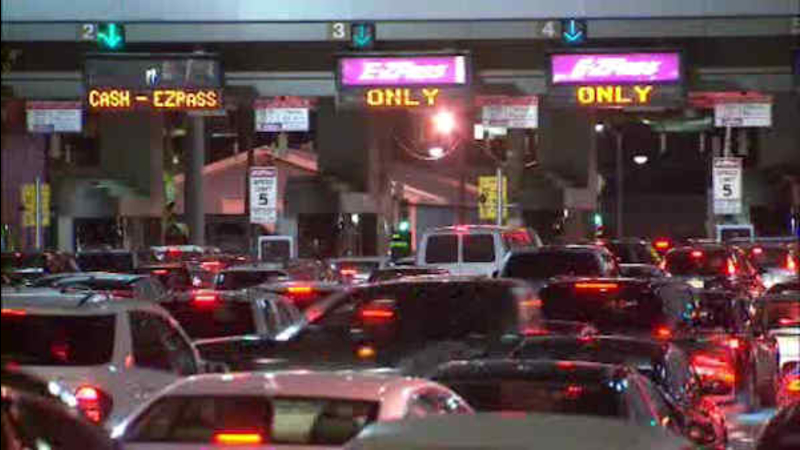 NEWARK, N.J. -- As the Port Authority of New York and New Jersey prepares to hit motorists this weekend with the last of five annual toll increases, the agency finds itself in the cross hairs of a fiscal challenge.

A recent report by Moody's credit rating service concluded that the Port Authority now relies more on revenue from tolls at its New York-area bridges and tunnels than on revenue from its airports. At the same time, bridge and tunnel traffic has been steadily, if slowly, declining over the past several years, and future toll increases are a potential political minefield.

Add to that a lengthy slate of large capital projects that includes a new bus terminal in New York City projected to cost about $10 billion and a new rail tunnel under the Hudson River, and the challenges become starkly evident.

"There are worrying signs on the toll side on our ability to rely on them as much in the future as we are now," Port Authority Chairman John Degnan said Friday.

The disconnect, in Degnan's words, between what the bistate agency will need to spend and the revenue model it has operated under up to now is forcing the Port Authority to take a hard look at raising revenue from other sources, including its extensive - and sometimes underutilized - real estate holdings.

Not surprisingly, the increases generated considerable backlash among motorists when they were approved, and a General Accounting Office report later chided the Port Authority for not holding enough public hearings and making those it did hold inconvenient to attend.

Some criticized the increases for being used to funnel money away from the Port Authority's core transportation mission and toward projects like the World Trade Center redevelopment, a charge agency officials denied. That claim was the basis for a lawsuit against the Port Authority filed by AAA Northeast, a nonprofit auto club, after the 2011 increases were approved.

Some of those criticisms remain, though the targets have shifted.

A spokesman for AAA Northeast said Friday the toll increases are now paying for projects like the $1 billion-plus Pulaski Skyway refurbishment in northern New Jersey. Federal investigators are probing whether the Port Authority had the legal grounds to fund the project.

"Much-needed revenues for interstate projects should not be diverted to road and bridge repair in New Jersey," spokesman Robert Sinclair said. "Five years and five toll hikes later, we still seek answers as to how much money the toll increases have raised and where the money is going as the Port Authority embarks on building a vitally important trans-Hudson rail tunnel and Manhattan bus terminal."

An outside audit report in 2012 called the toll increases necessary to keep up with the Port Authority's capital demands. While Degnan noted that traffic on the bridges and tunnels has been slowly decreasing, he said there has been a small uptick over the last few months. Increased business at area ports may be the reason, combined with low gas prices and a generally improving economy, he said.

"It's a slight bit of good news in an otherwise concerning situation," he said.

Degnan said selling or otherwise monetizing the Port Authority's real estate holdings - in particular the land on which the New York bus terminal sits, which would be available if the terminal is shifted a block west as proposed - could prove lucrative. Public-private partnerships for large projects, as the Port Authority is employing at Goethals Bridge and LaGuardia Airport, also would reduce agency costs.

Motorists can rest assured that one option is off the table, at least for now.

"I don't expect the Port Authority is going to be able, politically or otherwise, to raise tolls for a long time," Degnan said.