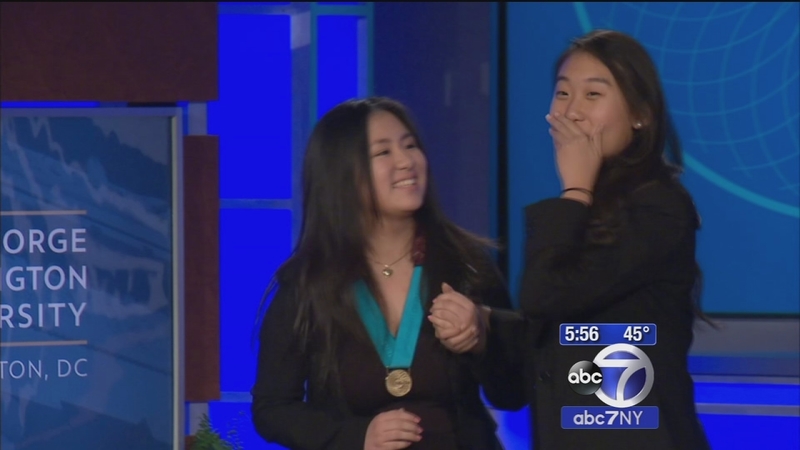 WASHINGTON, D.C. (WABC) -- Three students, a pair from Manhasset and a one from Jupiter, Florida, were awarded grand prizes of $100,000 scholarships for their significant research in the Siemens Competition in Math, Science and Technology, the nation's premier research competition for high school students.

The winners were selected from nearly 1,800 student project submissions.

Kimberly Te and Christine Yoo, both seniors at Manhasset High School, will share the $100,000 grand prize in the team category for their project on a more natural and cost-effective way to clean oil spills.

"I was shaking and crying," Yoo said. "Hasn't really fully sunk in, I think."

But at their school's science lab, their classmates were bubbling with excitement. After all, it is where the ideas start growing. from eighth grade on Saturdays into a high school special elective in which kids prepare for science contests of this caliber.

"Engineering has this very collaborative effect," Te said. "Just makes it so fun."

Friends watched live as the announcement was made.

"We all just busted out and were cheering," Manhasset senior Kevin Sadhu said. "It was such a great feeling to know that someone in our class did so well, and we're so proud of them."

Maria Elena Grimmett, a senior at Oxbridge Academy of the Palm Beaches in West Palm Beach, won the $100,000 grand prize in the individual category for her work to identify a potential new water purification method.

"Congratulations to Maria Elena, Kimberly and Christine, this year's Siemens Competition winners," Siemens Foundation CEO David Etzwiler said. "These three young women have demonstrated an incredible commitment to the advancement of science, math and technology as well as a resolve to tackle some of our world's most challenging environmental issues."

This year's panel of judges was comprised of nationally-renowned scientists and mathematicians, headed by lead judge Dr. Yongwu Rong, who is a mathematics professor and Associate Dean for Research and Strategic Initiatives of Columbian Colleges of Arts and Sciences at George Washington University.

Te and Yoo teamed up on a project entitled "Natural, Cost-Effective Anodes for Optimized Sediment Microbial Fuel Cells: Engineering a Novel Approach to Harvesting Energy and Cleaning Up Oil Spill Regions." They engineered a device made of natural, sustainable materials that cleans up oil-polluted areas, and uses the otherwise unusable oil to generate clean energy to be used to power remote sensors.

They had previously studied the biological effects of pollution on organisms and wanted to focus their research on cleaning up pollutants, specifically oil. They devised an efficient and cost effective device that could degrade hydrocarbons, while also producing electricity, using a loofah sponge.

Te hopes to help create new green energy technologies and find ways to sustain the earth. She aspires to pursue a career in environmental engineering and currently has a patent pending for a sustainable, cost-effective microbial fuel cell designed for energy production and oil spill remediation.

Yoo had previously been a national finalist for the Chemistry Olympiad, as well as a finalist for the International Science and Engineering Fair. She plays the flute, piccolo, piano and is a member of her school's fencing team. She is also a tutor through TASSEL, a program dedicated to teaching English to Cambodian children.