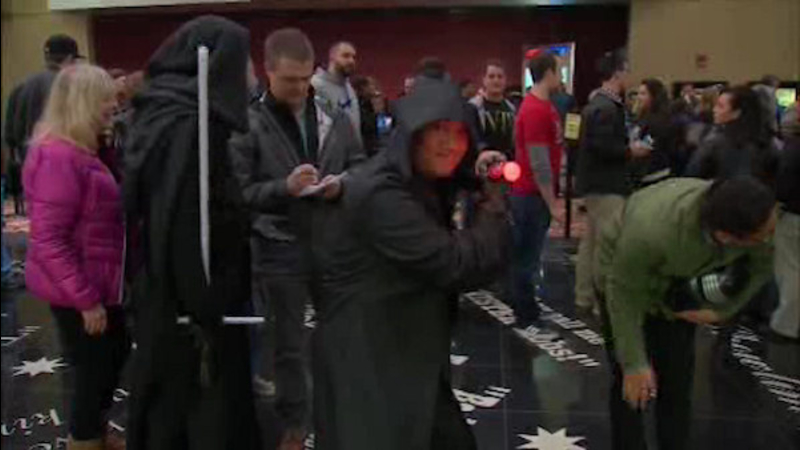 PARAMUS, New Jersey (WABC) -- It's not just another movie, this is "Star Wars: The Force Awakens."

This seventh episode in the series had many people standing in line for hours in the rain Thursday nightm, and Friday, some theaters are showing the film continuously.

For die-hard fans, there is no waiting for this one; they had to be there on opening day.

For so many this is more than a movie, it's a force, an event, an experience that's been shared for generations.

Star Wars has captured countless hearts and imaginations which explains why lines continue to be out the door at Garden State Mall even as midnight approached with both longtime and new fans anxious for this next chapter.

From character-inspired costumes, to festive attire, and even some impersonations, droves of fans packed an AMC theater in Paramus to get the first glimpse of the long awaited film, and to experience all over again a love that has transcended time.

Without giving anything away, fans said this movie was everything they hoped for and more.

There was a hiccup of sorts at one theater on Long Island Thursday night at the Regal Theater in Deer Park. Long Island reporter Kristin Thorne tweeted out video from inside the theater as people were told they wouldn't be able to see the rest of the movie.

YIKES! Glitch in #starwars at theater in Deer Park. Film can't be restarted. All given free tickets but booooo pic.twitter.com/z6cyM0Wd8p

It stopped playing after about 90 minutes due to a technical problem.

Workers weren't able to get it going again. Disappointed theater goers got their money back and two tickets to come back another time.