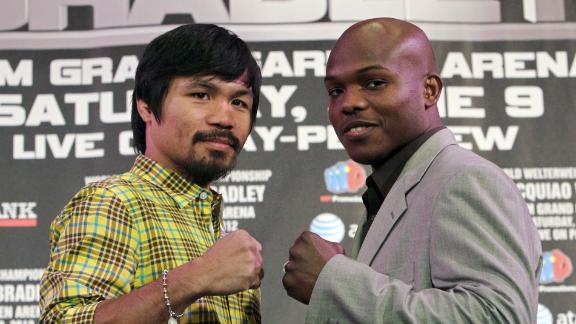 Manny Pacquiao has made his decision: He will fight welterweight titleholder Timothy Bradley Jr. for a third time on April 9 at the MGM Grand in Las Vegas in the main event of an HBO PPV card, Top Rank promoter Bob Arum said Wednesday.

Although the paperwork is being sent to both camps, Arum told ESPN that he has deals with both fighters and that he closed with Pacquiao on Tuesday by wiring him a $2 million advance against his $20 million guaranteed purse.

"[Pacquiao adviser] Michael [Koncz] cleared everything with Manny and we sent out the advance money to seal the deal," Arum said.

Although immediate public reaction on social media was brutally negative about the fight -- as neither of the first two installments were particularly memorable or competitive -- Arum said he believes Bradley is a different fighter than he was the first two times because he's now working with trainer Teddy Atlas, the ESPN television analyst.

Bradley fired career-long trainer Joel Diaz in the fall and convinced Atlas to take over his training. In their first fight together, Bradley looked very sharp in a title defense against an ill-prepared Brandon Rios, whom he knocked out in the ninth round of a one-sided fight on Nov. 7.

Atlas told ESPN.com that he has yet to hear from Bradley that the fight with Pacquiao was official but said he has already analyzed video of their first two fights.

Arum said he knew that many boxing fans would be a react negatively to the fight, but said, "This is a different Timothy Bradley under the aegis of Teddy Atlas," Arum said. "This is not me just saying that. The Bradley that fought Rios, whatever you thought about Rios, was a different fighter. It's still Bradley, but a new Bradley with Teddy. And at this point of his career, can Manny handle that? Remember, Manny is also coming off an injury."

Pacquiao, boxing's only eight-division titleholder, will be fighting for the first time in 11 months after losing a clear unanimous decision to Floyd Mayweather in their long-awaited and record-shattering welterweight title unification fight on May 2, also at the MGM Grand.

Pacquiao fought despite a shoulder injury he did not reveal until after the fight, angering many who shelled out a record $100 for the pay-per-view and thousands for tickets.

Pacquiao had surgery to repair a torn right rotator cuff following the bout, which sold a record 4.6 million pay-per-view subscriptions and generated in excess of $600 million, also a record.

In June 2012, Bradley claimed a split-decision win in one of the most controversial decisions in boxing history. While Duane Ford and C.J. Ross, both of whom no longer judge, gave the fight to Bradley, nearly everybody saw Pacquiao as the clear winner. The result was so controversial that there it spawned multiple investigations.

In the April 2014 rematch, Pacquiao won a lopsided unanimous decision as he dominated the fight just as many believed he had done the first time.

"Anyone who has watched me on ESPN for nearly 20 years knows I'm not one to throw out superlatives unless I believe them, but Pacquiao is one of the best fighters of the last decade," Atlas said. "It'll be a tough challenge, but we'll make sure we're ready for [it]. We will respect the challenge Pacquiao presents. We will do what we're supposed to do and be 100 percent prepared. It will be a difficult fight."

Arum is already licking his chops to promote the fight, in part, as a battle between Atlas and Freddie Roach, Pacquiao's Hall of Fame trainer and seven-time trainer of the year. Atlas and Roach don't particularly care for each other, and Arum is banking on some trash talk between the cornermen to help sell the fight.

Atlas, however, said he is not interested in being a sideshow with Roach.

"If that's what people are looking to see, they'll see shadowboxing," Atlas said. "They'll see Freddie by himself. I have no interest in that. This is about Timmy and about winning the fight. That's all it's about for me. It's about Timmy, not about me and Freddie."

Although the fight is supposed to be the final one of Pacquiao's legendary career -- he is likely to be elected to a six-year term in the Philippines' senate in May, which will leave him little time to train or focus on boxing -- Arum said he would not promote the bout as a career finale.

If Pacquiao wins, many believe he will continue to fight in hopes of luring Mayweather out of retirement for a lucrative rematch next fall.

Although fights against Crawford, the 2014 fighter of the year who is promoted by Top Rank, and England's Khan, a long shot to land the fight because he is in the stable of adviser Al Haymon, Arum's business enemy, were far more popular choices among fans and media, Arum said Bradley made the most business sense.

He said Top Rank spoke extensively with cable operators and satellite services to ask their view on which fight would do bigger business. He said they all agreed on Bradley.

"And they felt that Crawford was a great fighter but that even though the boxing fans knew him, the public at large hadn't heard of him. They thought Bradley, coming off the victory over Rios and the fact that he looked like a new fighter under Teddy Atlas, would do very well on pay-per-view."

Arum said executives from MGM Grand and HBO the same way about Bradley over Crawford or Khan.

"At that point, we directed our efforts on making the match between Pacquiao and Bradley," Arum said. "[Top Rank president] Todd [duBoef] worked with Monica Bradley [Timothy's wife and manager] on the terms, and he's satisfied. And the paperwork is being generated now.

"We also gave Pacquiao all the information we received from the TV companies and the MGM, and he made the choice."

Arum said Koncz toyed with the idea of making a fight with junior welterweight titlist Adrien Broner, another Haymon client, "at the last minute, but that was not happening. We shot that down."

Arum said one of the fights he is hoping to make for the undercard is between Team Sauerland-promoted super middleweight titleholder Arthur Abraham (44-4, 29 KOs), of Germany, and Mexican mandatory challenger Gilberto Ramirez (33-0, 24 KOs), who is with Top Rank.

The sides have been talking, and a purse bid is supposed to take place in January if they don't make a deal.