Woman speaks out after being slashed in neck in Ditmas Park

WABC
By Stacey Sager
DITMAS PARK, Brooklyn (WABC) -- Police are searching for the attacker who slashed a woman in the neck in Brooklyn Thursday morning.

"There was not much damage, it wasn't too deep," the victim said.

But she says she'd feel a whole lot better if police can catch the man responsible.

Surveillance video captured him running away.

Police say he was wearing a gray sweatshirt and black sweat pants, along with an American flag bandana covering much of his face, as he approached this 53-year-old woman from behind and then slashed her in the neck.

"What do you say about a guy who does something like this? What can you say?" Eyewitness News asked.

"I can't say nothing, just needs help, and I hope finding him soon as possible," the victim said.

The woman, who did need 13 stitches, asked that Eyewitness News not use her name, so did her husband. Both of them are still extremely worried that if this happened to her, it could happen to anyone.

With these types of slashings on the rise, victim after victim are all coming forward saying that they felt helpless.

"If somebody just attacks you from behind, how do you defend yourself?" the victim's husband said.

This woman says she couldn't, but she did want to warn New Yorkers not to do what she did while walking down the street.

"Horrible, horrible, better be aware. Don't stay on your cell phone while walking," she said.

"That's what you were doing?" Eyewitness News said.

"Yeah, I was looking at my text messages," the victim said.

In this case, the attacker left behind two knives, his bandana, and plenty of potential DNA evidence.

"He was carrying a bag with him. We have some substantial evidence from that. He then ran south on Argyle Road. Detectives are in the area looking for this individual, again without provocation," said Chief of Detectives Robert Boyce, NYPD.

But whether that evidence is enough to catch the attacker remains to be seen.

"I hope they catch him as soon as possible," the victim said.

The wanted poster of the suspect: 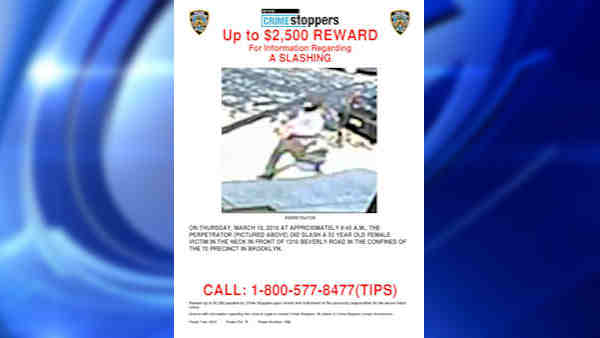