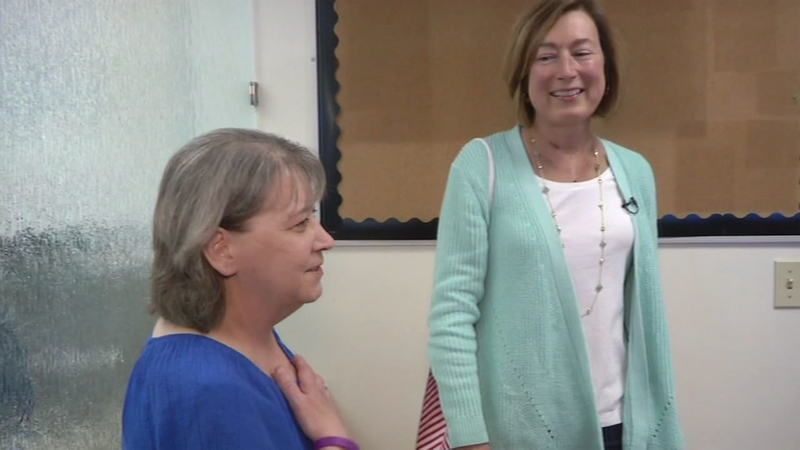 STANFORD UNIVERSITY, Calif. -- Two women are recovering here in the Bay Area after a surgery that gave them an incredibly intimate bond. One of those women now has the other's heart, and they met for the first time after the surgery.

From biking through France to riding the rapids, Linda Karr poured her heart into life. But several years ago, that same heart began to fail.

After years on the waiting list for a donor, Karr turned to Dr. Joseph Woo and the heart transplant team at Stanford Hospital. They're solution was a rare procedure known as a domino transplant.

The team had identified another patient, Tammy Griffin, who was about to receive a full heart-lung transplant from a deceased donor.

"Take out both lungs and the heart as one block and put in an entire new block," Woo said.

But while doctors needed to transplant the donor heart and lungs as a set for surgical reasons it also created an opportunity with Griffin's old heart.

"Her heart, in theory, could function very nicely in another patient," Woo said.

Using three models, Woo explains what happened next. Before beginning the heart-lung procedure, they would shift Griffin's heart to Karr.

Just weeks after that domino surgery, Griffin was in a waiting room at Stanford for a chance to meet the woman who now owns her old heart.

"I promise to take care of my new heart. Even though we were strangers before today, you will always be a part of me now," Karr said.

Doctors say both women are making strong recoveries. Karr, who lives in Berkeley is already working out on a treadmill. And Griffin is hoping to return home to Oregon when her new heart and lungs are strong enough.

"I feel so much better I can walk and talk at the same time," Griffin said.

Both women say they'd like to stay in touch after sharing a rare and moving meeting of the hearts.

In a practical sense Karr and Griffin were close even before they met. Their surgeries took place in adjoining operating rooms, with one surgeon working on Karr the other on Griffin.