Dirk Nowitzki might play beyond the end of 2017 deal 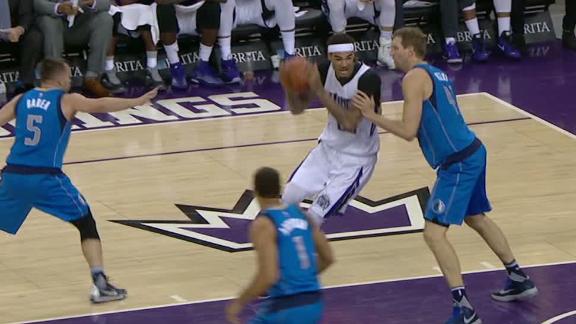 In an interview Sunday with ESPN Radio, Dallas Mavericks forward Dirk Nowitzki acknowledged that he has given thought to playing beyond the final remaining season on his contract.

Although he stressed that he wouldn't make a firm decision until after completing the 2016-17 campaign, Nowitzki said on ESPN Radio's "NBA Insiders" show that playing an even "20 years would sound really, really great."

Currently in his 18th season, Nowitzki said, "My goal was when I signed this three-year deal to fulfill that contract. And so if I play next year through, by that point I'll be 39. To be honest, 20 years [in the NBA] would sound really, really great. And next year would obviously be my 19th year, so maybe after this next year I could sign on one more. But I'll just have to wait and see, I think, at this point."

Nowitzki's sole focus at the moment is hauling the Mavericks into the playoffs. A lopsided loss Sunday night at Sacramento, without the injured Chandler Parsons (knee) and Deron Williams (abdominal strain), dropped Dallas to 35-38 and a half-game back of the eighth-seeded Houston Rockets (36-38) in the West.

The Mavericks have missed the playoffs just three times in Nowitzki's 17 seasons to date and only since his maiden trip to the postseason in 2001. Nowitzki, who turns 38 in June, has a player in option in his contract to return to free agency this season, or he can opt in and play next season as scheduled at the bargain price of $8.7million.

Nowitzki, though, was adamant in Sunday's interview that he won't play beyond next season simply because it might give the game's No. 6 all-time scorer an opportunity to move ahead of Wilt Chamberlain into the top five.

"Stats is never really something I played for," Nowitzki said. "I think if it's no fun anymore to get up in the morning and go to practice, then I better call it a day. I started playing because it's a fun sport to me and I'm gonna quit while it's fun. I'm not going to play another year saying I have to get into the top five [in scoring]. That's never how my mind worked."