President Obama has lunch with working families, including mom from the Bronx 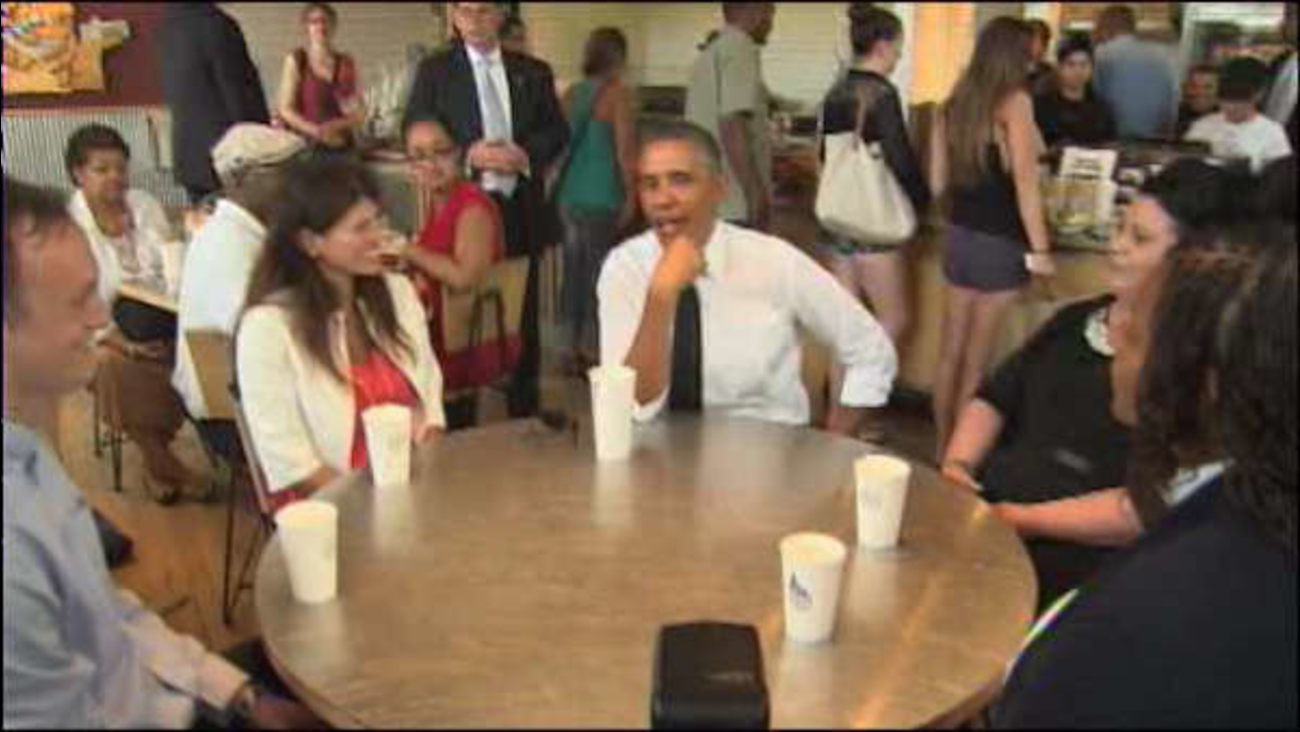 WASHINGTON, D.C. --
On Monday, President Obama rounded up a few participants at a White House working families summit for a short walk to a local Chipotle restaurant, where they swapped stories while enjoying the fast-food favorite.

"It's been awhile since I had the burrito bowl," Obama said after lunch.

Among those who had lunch with the president was Shirley Young, a working mother from the Bronx.

After working in various fast food restaurants and as a receptionist, she began working as a Certified Nursing Assistant at age 25.

She has been caring for the elderly and people with disabilities ever since. She is the mother of 16 year old twins Kendill and Kaishia and has been a single mom for most of their lives.

Obama has been comparing his yearnings to escape the White House security bubble to an animal breaking free from his cage. And his objects of pursuit once out in the wild include a good burger, some casual Mexican and a nice cup of hot tea.

The president's advisers have been casting their boss' outings as an effort to break free from the confines of the White House and interact more with the public. But his destinations suggest the president may be equally interested in shaking up his dining routine after more than five years of White House meals.

Earlier this month, Obama grabbed Education Secretary Arne Duncan for a lunch run at a local restaurant whose owner had written the president a letter promising him the best burger if he stopped by. And last month, Obama and Joe Biden headed to a nearby Shake Shack, where the president ordered a burger and fries and the vice president indulged in a cheeseburger, fries and milkshake.

At each of these stops, the trappings of the White House bubble indeed followed along, including a heavy presence of Secret Service agents and the standard contingent of White House press. But in one recent instance, Obama violated long-standing protocol and slipped out of the White House without reporters in order to join his chief of staff Denis McDonough for a Starbucks run. The president ordered a hot tea.

Obama has also been extending his culinary adventures overseas, trading stuffy formal dinners at palaces or presidential mansions for nights on the town in foreign capitals.

During an April trip to Tokyo, Obama and Japanese Prime Minister Shinzo Abe hit up the world-renowned sushi restaurant Sukiyabashi Jiro. While Obama lavished praise on the sushi as he departed the restaurant, local media was abuzz with reports that the president skipped some courses on the prix fixe menu.

And on an early-June trip to Paris, Obama enjoyed not one dinner, but two. He and French President Francois Hollande dined with colleagues at a restaurant near the Champs-Elysees. The president then dashed over to a second restaurant to meet friends for a leisurely two-hour outing.