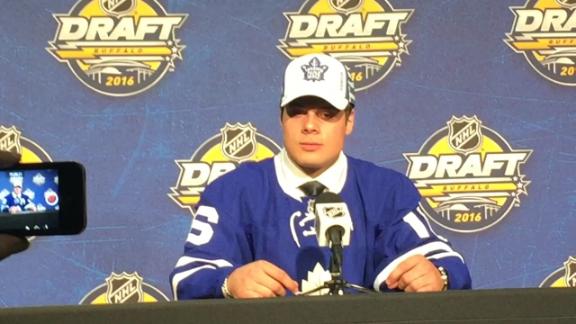 BUFFALO, N.Y. -- On the heels of the NHL expanding into Las Vegas, the Toronto Maple Leafs pinned their future on Arizona-raised center Auston Matthews with the first pick in the NHL draft.

The 18-year-old, born in California and raised in Scottsdale, sparked an international-themed parade to the podium Friday night that featured a draft-record 12 Americans selected in the first round. The Finns made a big splash, too, with three of the top five picks.

"Twenty years ago, I certainly didn't think I'd be sitting here," Winnipeg Jets general manager Kevin Cheveldayoff said, referring to whether he ever envisioned a player from Arizona going first in the draft.

"It was a first, certainly, to see how dominant all three of those were at the world juniors," Cheveldayoff said of the Finnish team that won the championship in January. "I wouldn't say that was their coming-out party, but I think it was when everyone went, 'Aha, these guys are legit players.'"

Amid chants of "Go, Leafs, Go!" Matthews became the seventh American-born player to be selected No. 1 and first since the Chicago Blackhawks chose Patrick Kane with the top pick in 2007.

"My heart was beating. It was very nerve-wracking," Matthews said, noting the Maple Leafs had not tipped their hand on who they were going to select since winning the NHL draft lottery in April. "Once they called my name, it was definitely a sigh of relief and a lot of excitement."

For Toronto, Matthews represents a significant piece in general manager Lou Lamoriello's extensive rebuilding plans to restore relevance to one of the league's most high-profile franchises. The Maple Leafs have missed the playoffs in 10 of the past 11 years, and they spent last season purging high-priced contracts and veteran talent with a focus on rebuilding through youth.

"He's an elite player with an elite drivetrain," Toronto coach Mike Babcock said. "He's going to make us better, and he'll develop into a top, top center in the National Hockey League."

Lightning general manager Steve Yzerman provided few updates regarding contract talks withSteven Stamkos. Despite saying he's not closing the door on re-signing the team's captain, Yzerman acknowledged he doesn't want to risk losing Stamkos without getting something in return.

When posed a question of potentially signing and then trading Stamkos, Yzerman called it "an interesting idea."

The Lightning have leverage to do so. Under NHL rules, they're the only team that can offer Stamkos an eight-year contract, while others are limited to seven years.

Starting Saturday, pending unrestricted free agents such as Stamkos are allowed to speak with all teams but can't sign a contract until July 1.

The Calgary Flames addressed several needs by selecting forward Matt Tkachuk -- the son of former NHL star Keith Tkachuk -- with the No. 6 pick, and acquired goalie Brian Elliott in a trade with St. Louis. The Flames have had difficulty filling the goalie spot after Jonas Hiller, Karri Ramo, Joni Ortio and Niklas Backstrom split the duties last season.

The Detroit Red Wings gained relief under the salary cap by trading the contract of veteran star Pavel Datsyuk, who is leaving Detroit to play in Russia next season. Detroit freed up $7.5 million in cap space by dealing Datsyuk to Arizona. The teams swapped first-round picks, with the Coyotes moving up four spots to No. 16, where they selected defenseman Jakob Chychrun.

The Coyotes also had the seventh pick, with which they drafted center Clayton Keller.

Starting with Columbus selecting Pierre-Luc Dubois at No. 3, only three Canadian-born players were taken among the top 10 picks. That matched last year's record-low total for Canada.

Finland had four players selected in the first round, with center Henrik Borgstrom taken 23rd by Florida.

"It's a huge thing for our country, ourselves and the players," Laine said. "I think it shows to everybody that we have good juniors, and we can be good at those tournaments and we can get drafted high."

The Montreal Canadiens traded forward Lars Eller to Washington for the Capitals' second-round draft picks in 2017 and '18. The Canadiens then acquired forward Andrew Shaw from the salary cap-strapped Blackhawks for two second-round picks.

The loudest cheers were reserved for the Sabres and began when owner Terry Pegula took the stage to welcome everyone to Buffalo.

Another roar went up when Buffalo used the eighth pick to select forward Alexander Nylander. His father, Michael, was a 15-year NHL veteran, and his brother William plays for the Maple Leafs.

Before the draft began, NHL commissioner Gary Bettman announced that the league's annual pre-draft rookie combine will return to Buffalo for a third consecutive year.

Rounds 2-7 will be held Saturday.