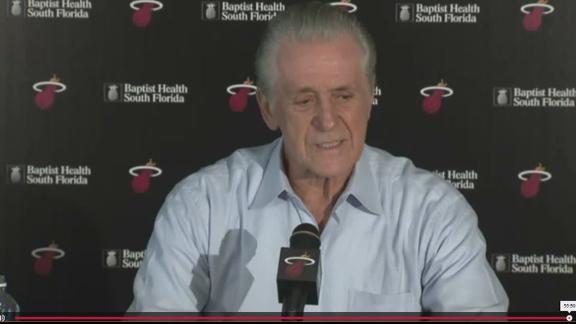 Miami Heat president Pat Riley on Saturday said it is still too early to know when Chris Bosh will be able to return to the team after a recurrence of blood-clotting issues kept the 11-time All-Star on the bench for the final 29 games of the season.

"It's always fluid and it always has been," Riley said Saturday during a news conference to address the team's offseason to this point. "... I know he wants to play and we would be open to that."

Riley said nothing has been determined and that the team could gain clarity on Bosh's health situation in the next few months.

Until then, however, the team is considering its options for Bosh, including a restricted travel schedule and a limited workload.

Bosh, who has been working out, still has three seasons and roughly $75 million remaining on the five-year contract he signed in 2014.

He was diagnosed in February, but neither he nor the team would disclose his condition until after the season. Itwas the second year in a row that his season was cut short at the February All-Star break because of health concerns that stemmed from blood clot issues.

After losing Bosh in 2015, the Heat went 15-15 over the final 30 games, finished 37-45 and missed the playoffs for the first time in six years amid their first season after LeBron James' return to Cleveland.

This time, Miami went 19-10 after Bosh left the lineup, secured the third overall playoff seed in the East and defeated Charlotte in seven games during the first round before falling to Toronto.

Bosh averaged 19.1 points and 7.4 rebounds in the 53 games that he did appear this season.