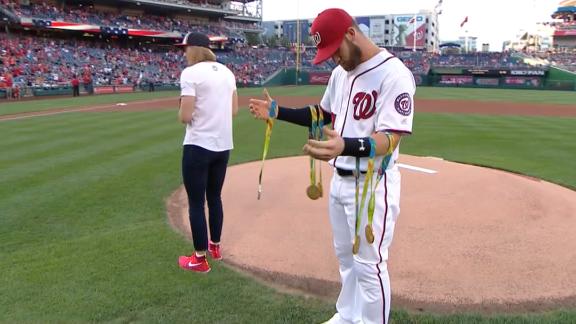 The 19-year-old freestyler and D.C.-area native won four golds and a silver during the 2016 Summer Games in Rio de Janeiro.

With all five medals draped around her neck, she was escorted to the mound by 2015 National League MVP Bryce Harper prior to the third game of the series between regional rivals theWashington Nationals and Baltimore Orioles. Before making her delivery, Ledecky unloaded all her hardware and handed it to Harper, who hung the medals around his forearms.

"They all wanted to see how heavy they were and things like that," Ledecky said. "They are pretty heavy. It was kind of a different feeling for me to have them be a fan of me when I've been a huge fan of theirs for a couple years."

Then, standing at the front edge of the mound and wearing a black-and-tan Wilson glove on her left hand, she delivered a strike to Washington reliever Shawn Kelley, who handled the ceremonial catching duties.