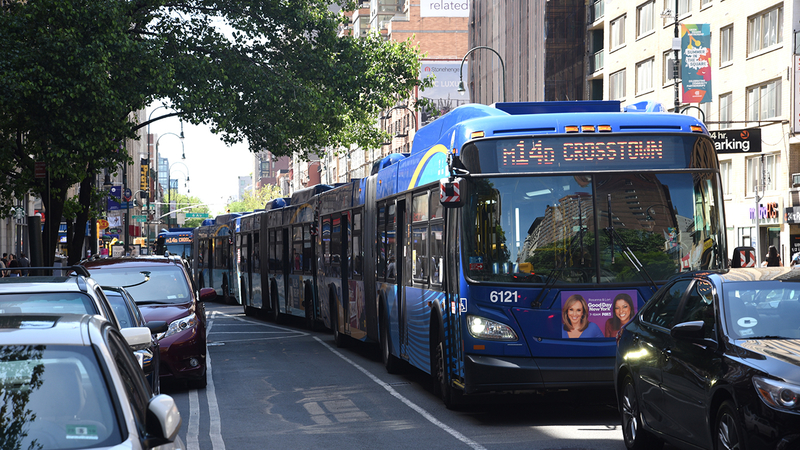 UNION SQUARE, Manhattan (WABC) -- A federal judge lifted a temporary restraining order on the 14th Street Busway, meaning the city can proceed with partially banning cars on the stretch of 14th Street between Third and Ninth Avenues.

The area, according to the city's plan, will instead be converted into a bus and delivery zone from 6 a.m. to 10 p.m. seven days a week. The city's Department of Transportation said this will go into effect Monday.

The judge had issued a temporary restraining order on the play in response to a lawsuit from West Village and Chelsea block associations, arguing it would result in "horrific traffic jams" on residential side streets and should have undergone an official environmental review.

"We don't think it's a good tradeoff for cars to come down our streets and spew pollution in our windows that we have to breathe in," said Arthur Schwartz, a neighborhood resident who went to court to block the plan, unsuccessfully.

In responses filed in court, the city and MTA have said the impacts on side streets would be fairly limited -- a minute-and-a-half to crosstown trips on 12th, 13th, 15th, and 16th streets -- while time saved for bus riders would be between two and nine minutes.

In an amicus brief filed Monday, the Riders Alliance and Transportation Alternatives calculated that the delay in implementing has cost rush-hour M14 bus riders the equivalent of 52 weeks, or 8,654 hours, of travel time since July 1, the busway's planned start date

"Let's get this DONE!" the mayor tweeted in response.

JUST IN: We prevailed in our legal fight to speed up buses on 14th Street! With this hurdle clear, @NYC_DOT is moving ahead with final roadwork so we can get New Yorkers moving on one of the city’s busiest thoroughfares.

Let’s get this DONE!

The group Transportation Alternatives released a statement saying, "In a city where buses move at walking speed, the Department of Transportation has a duty to remedy the problem."