Bear rescued after head gets stuck in cookie jar

AP
RINGWOOD, N.J. -- State environmental staffers came to the rescue when a young black bear cub got his head stuck in an oversized jar and had to be rescued from a tree in northern New Jersey.

Environmental Protection Department spokesman Larry Ragonese said around 6 p.m. Friday, the DEP got a call from a resident on Lake Riconda Drive in Ringwood about a bear in distress. The Fish and Wildlife Bear Team found a male bear, who was about 6 months old, and 40 feet up in a tree with a jar on its head.

Nancy Lagomarsino had been walking her own dog, Daisy, when she realized there was a 6-month-old bear cub staggering around her front yard with an animal cracker container over his head.

Through the plastic, the bear spotted Lagomarsino and became spooked when approached. It went up a nearby tree, but got wedged about 40 feet up.

"Then I realized the poor thing is up a tree with plastic over his head and the sun was just beating right on it," said Lagomarsino. "I said, 'oh my gosh, I can't not do anything.'"

She called for help.

DEP officials said it appears the bear was trying to get to crumbs at the bottom of an animal cookie jar when it got stuck on his head. As the 28-pound animal tried to eat what remained in the jar, it apparently pulled the jar over his head and it got stuck.

Ragonese said a biologist was able to inject the tranquilizer into the bear's paw and extricate the bear from the tree. Fire departments from Ringwood and Wanaque cut the jar away from the bear's head. It was dehydrated and having problems breathing, and was taken to a rehabilitation facility where the bear is expected to remain for four to six weeks.

DEP staffers arranged netting in case the bear fell to the ground.

"When he gets bigger he'll be back!" said Lagomarsino.

After a four to six week stint in rehabilitation, experts will release the animal back into his original habitat. 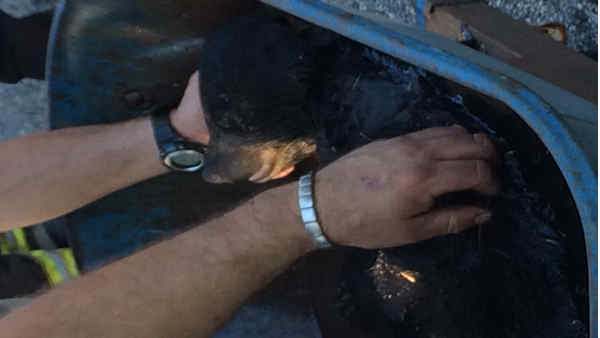 Bear cub stuck in tree has head stuck in jar
A bear got its head stuck in a cookie jar, then had to be rescued from a tree in Ringwood, N.J.
Related topics:
ringwoodbear in treenew jersey newsbear cub
Copyright © 2020 by The Associated Press. All Rights Reserved.
More Videos
From CNN Newsource affiliates
TOP STORIES