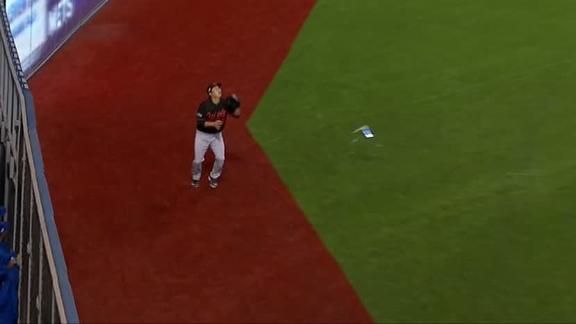 TORONTO -- The Baltimore Orioles were enraged after a fan threw a beer can onto the field as outfielder Hyun Soo Kim caught the final out in the seventh inning of theBlue Jays'5-2 win in the American League wild-card game at Rogers Centre on Tuesday.

As Kim settled under a fly ball off the bat of Melvin Upton Jr., the can sailed past him and landed on the turf. Baltimore center fielder Adam Jones angrily pointed into the stands and yelled into the crowd.

Baltimore manager Buck Showalter emerged from the dugout and walked all the way to left field to register his displeasure with the umpiring crew before returning to the dugout.

Said Jones: "Someone threw a beer down at my player. That's about as pathetic as it gets between the lines. You don't do that. I don't care how passionate you think you are. Yell, cuss, scream, tell us we're horrible. We get that. We're the opposition. We completely understand that. To throw something at a player, that's as pathetic as it gets."

Blue Jays spokesman Erik Grosman said the fan was not ejected because he took off before police had a chance to get to him. Police are investigating.

On Wednesday, the Toronto police tweeted about the incident, asking the fan to turn himself in.

"Something like that should never happen. It's the first time for me and hopefully the last," Kim said through an interpreter.

Showalter said he just wanted the person identified and thrown out.

"It's tough when you have many people in the ballpark and one person does something that reflects poorly on all of them," he said. "We're fortunate and lucky that somebody didn't get hit."

Jones also said the abusive fan should be punished.

"I hope they find the guy and press charges," he said. "[Kim] wasn't looking, and you can hit him in the back of the head and you never know what could happen. That's a full beer being thrown. That's not part of the sport. To put us in harm's way when all we're doing is focusing on the game, that's not part of baseball. Throw an octopus. Throw hats. Do something like that."

Jones also appeared to confirm a report that racial and ethnic slurs were hurled at him and Kim from the Rogers Centre stands, but he said he wasn't concerned about verbal assaults.

"I've heard that so much while playing baseball, I don't even care," Jones said. "Call me what you want.

"We hear everything -- people cussing you and flipping you off. I get it. That's fine. We're here to play baseball, nothing more, nothing less. And to put us in harm's way just isn't part of the game. It's not part of any sport."

Orioles catcher Matt Wieters watched the incident play out from behind the plate and agreed with Jones that the fan in question should be punished for his actions.

"It's a shame some idiot would decide to do that," Wieters said. "There's no point in having a guy like that in the stands. I hope some sort of charges are pressed against the guy, because that was close to doing some damage."

Blue Jays fans tossed bottles and debris on the field during Game 5 of last season's AL Division Series against theTexas Rangers. The fans were upset by the call that let Rougned Odor score from third after catcher Russell Martin's throw back to the mound deflected off Shin-Soo Choo's bat.

A Blue Jays fan threw a drink at Orioles outfielder Nate McLouth during a game at Rogers Centre in May 2013.