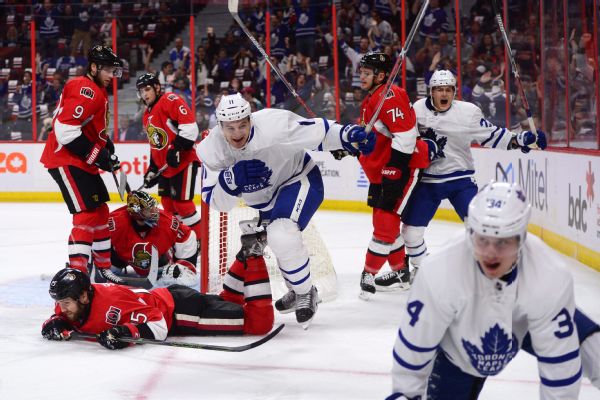 Auston Matthewslooked like an established star in his NHL debut on Wednesday night.

And the No. 1 overall pick of the Maple Leafsmade some history in the process.

Matthews recorded the quickest hat trick for a player making his NHL debut (since 1943-44), then became the first to score four goals in his first game, doing it all on opening night against the Senators in Ottawa.

Matthews became the fifth player overall to notch a hat trick in his debut, joining Derek Stepan of the New York Rangers (2010), Fabian Brunnstrom of the Dallas Stars (2008), Real Cloutier of the Quebec Nordiques (1979) and Alex Smart of the Montreal Canadiens (1943).

Matthews scored on his first shot 8:21 into the first period, snapping in a pass from Zach Hyman during a scrum around the net.

His second goal came with 5:42 left in the first, after he dangled through a pair of Senators near the blue line. After briefly losing possession, he stole the puck from two-time Norris Trophy winner Erik Karlsson along the boards then beat goalie Craig Anderson with an odd-angle forehand.

Matthews put Toronto ahead 3-2 with a one-timer from inside the right circle on a feed from Morgan Rielly 1:25 into the second period. Fans showered the ice with hats, and his mom was shown high-fiving fans and covering her face in disbelief.

He then netted historic No. 4 with 3 seconds left in the second period, breaking a 3-3 tie.

The four goals came on his first six NHL shots.

At this pace, Matthews will break Wayne Gretzky's NHL record for goals in late February of 2019, in his third NHL season and his 224th NHL game. Gretzky had 186 goals in his first 224 NHL games.

Matthews, a 19-year-old from Scottsdale, Arizona, is the 12th first overall pick to score in his NHL debut.

His parents were shown on the broadcast celebrating the first goal with a kiss.

Matthews Mania no doubt already is sweeping the NHL, but don't be in a rush to buy any of his jerseys just yet.

The NHL official store does not have any Matthews jerseys ready to go, so if fans want to purchase one, they have to customize it.