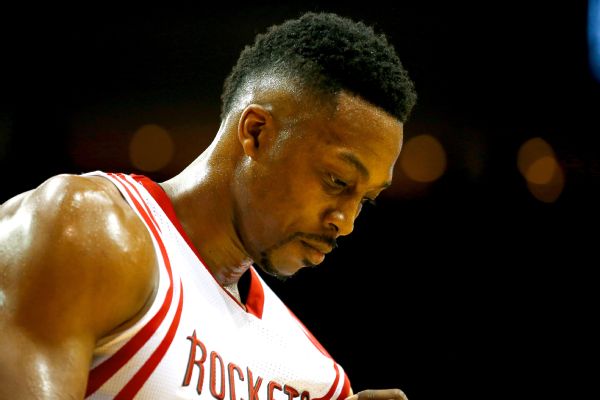 Houston Rockets management repeatedly pushed for Clint Capela to get more playing time at the expense of Dwight Howard last season, sources told ESPN, adding to the disharmony that played a prominent role in the team's disappointing 2015-16 campaign.

While Howard's minutes remained steady throughout the season, word of Rockets management's desire to reduce his role filtered back to the big man. That further deteriorated Howard's trust of the franchise, one of many factors in the dysfunction that dragged Houston down during a 41-41 campaign that came on the heels of a Western Conference finals run.

"There were times I was disinterested because of situations that happened behind the scenes that really hurt me," Howard said in a May interview with ESPN's Jackie MacMullan. "It left me thinking, 'This is not what I signed up for.'"

Asked to elaborate, Howard added: "I felt like my role was being reduced. I went to Daryl and said, 'I want to be more involved.' Daryl said, 'No, we don't want you to be.' My response was, 'Why not? Why am I here?' It was shocking to me that it came from him instead of our coach."

Morey declined to comment, and Howard declined to further discuss issues related to his Rockets tenure. Bickerstaff, now the Memphis Grizzlies' associate head coach, was not available for comment due to team rules restricting access to assistants.

Sources said Howard learned of management's attempts to cut his minutes in midseason and shared a mutual interest with the Rockets front office to move him before the trade deadline. The Rockets shopped Howard, according to sources, but no deal came close to materializing largely due to Houston's ambitious asking price: an immediate major contributor and either a promising developmental project or future first-round pick.

Rockets management's motivation for wanting to increase Capela's workload at the expense of Howard was twofold, according to sources. The Rockets anticipated that Howard would likely leave in free agency, making Capela's development critical to the franchise's future, and management felt that Capela's performance merited more minutes.

Howard averaged 32.1 minutes per game last season, including 31.9 minutes per game after the All-Star break. It was the second-lowest minutes average of Howard's career, behind only the previous season, when injuries limited him to 41 games.

Capela, the Rockets' 2014 first-round pick who played in only 12 games his rookie season, averaged 19.1 minutes in his second NBA season with his playing time actually dipping slightly after the All-Star break.

The Rockets, according to sources, planned for most of the season to part with Howard in the summer. However, Houston management decided at the 11th hour to attempt to persuade Howard into exercising the player option for the final season of his contract, which would have paid him a salary of $23.2 million this season.