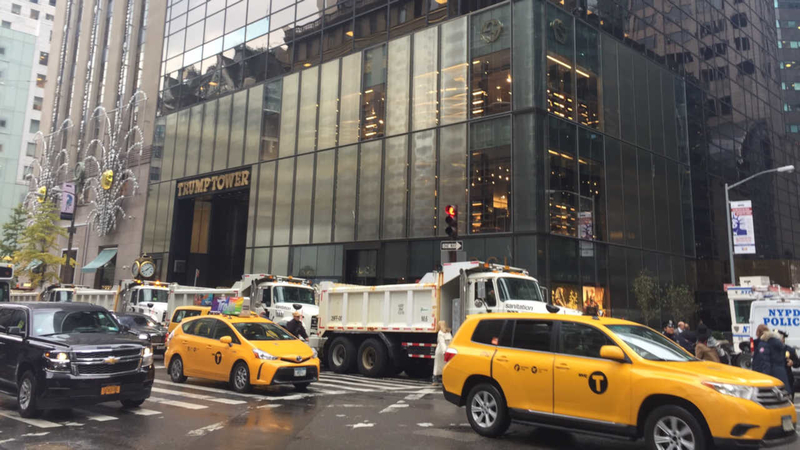 MIDTOWN, Manhattan (WABC) -- Security for President-elect Donald Trump is unprecedented in Midtown. 56th Street has been shut down, and new restrictions are in place.

"This becomes a security nightmare for the NYPD," says security expert Joe Giacalone.

Giacalone, a former NYPD detective and John Jay instructor believes Trump Tower, in the heart of Midtown, and also a public building offers a number of unique challengers for the secret service and the NYPD.

"Especially now that he is the President-elect, people are going to want to go see it. It's going to become another big tourist attraction, so I think we're going to see a combination of private security and the NYPD," adds Giacalone.

People were already clogging the sidewalks on the West side of Fifth Avenue, with police officers moving them along. NYPD officials are now in talks with the secret service, Eyewitness News has learned, and have previously said the Tower represents 'a lot otf challenges'.

Seeing Trump Tower from the air, nestled with many other buildings, there are more new protections. Eyewitness News has learned the FAA will put a temporary flight restriction above the building until Inauguration.

However, now, seeing dump trucks and salt spreaders lining Fifth Avenue, and normally crowded sidewalks barricaded with limited access, New Yorkers are trying to get used to the new changes.

"I actually think it's only going to be for a limited time. I think it's for right now, because of all the hype regarding the election, but I figure about a month or two, it will be back to normal," says Laseanda Covington.

"We can't have dump trucks all up and down the avenue. I mean, it's just not practical, and it doesn't look nice, so I think this is going to happen one day at a time, so to speak," adds Giacalone.
Related topics:
politicsmidtownnew york citydonald trumptrump towersecret servicepoliticssecurity
Copyright © 2021 WABC-TV. All Rights Reserved.
More Videos
From CNN Newsource affiliates
TOP STORIES