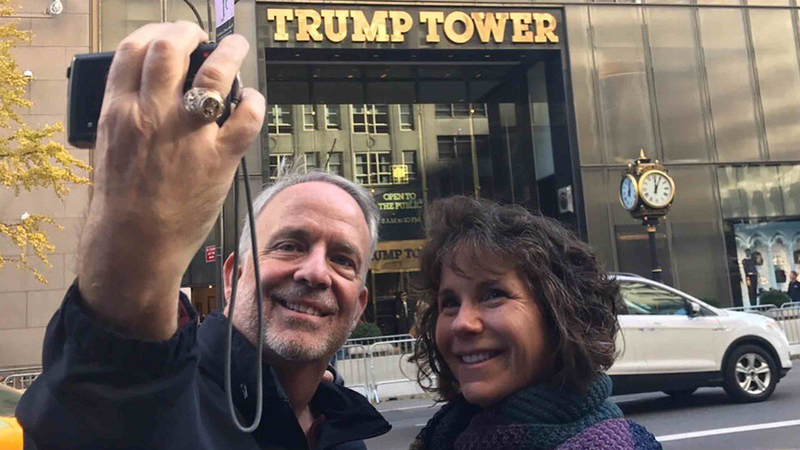 MIDTOWN, Manhattan (WABC) -- Holidays in New York and selfies go hand in hand, or more like "phone in hand."

This season, there's a new tourist destination and it's keeping the NYPD busy outside Trump Tower.

"I'm going to take this picture and send it out and see what kind of response I'll get," said Eddie, a selfie poster.

Eddie will get a response, and so will this gentleman from Spain.

"Before coming, we didn't think about it. (And now that you're here?) Oh yes of course," he said.

Ever since Election Day, this one block street along Fifth Avenue has hands down morphed into one of the most popular spots for pictures, specifically selfies.

"Empire State Building, Times Square, Top of the Rock, (So this does rank up there with those?) Oh yeah, that's the top," a tourist said.

Trump Tower on 57th Street, where president elect Donald Trump lives, is now a magnet for those wanting to capture what they believe is the ultimate photograph.

"My boss said there's going to be security all over Trump Tower, and to make sure you go take a picture in front of it," said Dora, a tourist from California.
The crowds have gotten so big that NYPD officers have to constantly remind these shutterbugs that this is a busy sidewalk in Midtown.

Send us your #trump tower selfies, the new must have picture & the surprising reax from 1 woman @ABC7NY at 5 pic.twitter.com/zklu6zgEdP

Some there Monday said that taking a photo there has nothing to do with their political preference rather, gives them a chance to document this historical process.

"Actually I was avoiding it because I've been so emotional all week," said Joy, a tourist from Dallas.

She was standing across the street from Trump Tower in tears.

The social workers took a selfie using the increasingly popular backdrop to express her frustration with Trump.