Donald Trump issues Thanksgiving message: 'It is time to restore the bonds of trust between citizens' 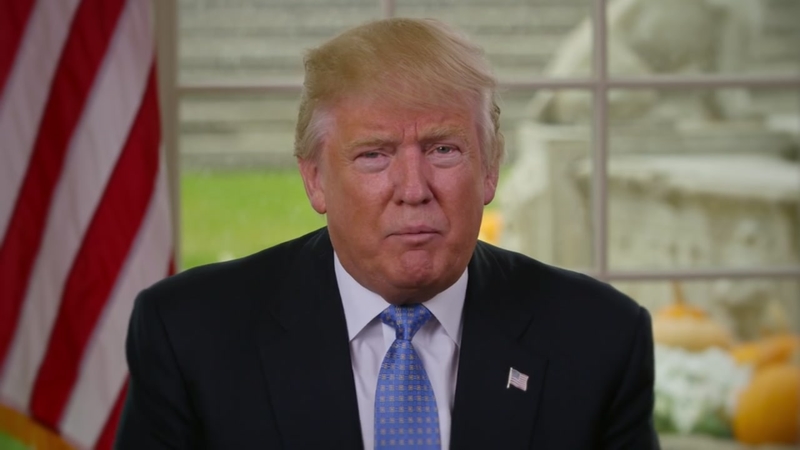 NEW YORK -- President-elect Donald Trump issued a video message to Americans, calling for them to come together over and find common ground.

"In declaring this national holiday, President Lincoln called upon Americans to speak with "one voice and one heart." That's just what we have to do," Trump said.

** Click the video player above to watch the entire message **

"This historic political campaign is now over. Now begins a great national campaign to rebuild our country and to restore the full promise of America for all of our people."

Injecting the first diversity into his Cabinet-to-be, Mr. Trump selected two Republican women on Wednesday who had unflattering things to say about him during the presidential campaign: South Carolina Gov. Nikki Haley to serve as U.S. ambassador to the United Nations and charter school advocate Betsy DeVos to lead the Department of Education.

Gov. Haley has little foreign policy experience, yet Trump praised her as "a proven dealmaker." DeVos, like Trump, is new to government but has spent decades working to change America's system of public education.

DeVos and Haley are the first women selected for top-level administration posts as the president-elect works to shape a White House team from scratch. Haley is the daughter of Indian immigrants, so she also would be his first minority selection after a string of announcements of white men.

Retired neurosurgeon Ben Carson said "an announcement is forthcoming" on his role, which would make him the first black choice - possibly as secretary of Housing and Urban Development - but he also suggested he'd be thinking about it over the Thanksgiving holiday.

"I feel that I can make a significant contribution particularly to making our inner cities great for everyone," Carson wrote on his Facebook page.

Trump is also expected to select billionaire investor Wilbur Ross Jr. to lead the Commerce Department, a senior Trump adviser said Wednesday, speaking only on condition of anonymity because the adviser was not authorized to disclose internal deliberations. The 78-year-old Ross, who is white, is chairman and chief strategy officer of private-equity firm W.L. Ross & Co., which has specialized in buying failing companies.

Wednesday's picks came as Trump worked to distance himself from the "alt-right," a movement of white supremacists who continue to cheer his election.

He announced his two new choices in a statement released as he gathered with family behind closed doors at his Palm Beach estate for Thanksgiving. He's spending the holiday there after a week of interviews of potential appointees in New York, punctuated by announcements of members of his national security team.

Bad blood between Trump and his new Cabinet selections had been evident through much of this year's campaign.

"The people of South Carolina are embarrassed by Nikki Haley!" Trump wrote in March. Haley denounced several of his campaign comments and urged voters to "reject the siren call of the angriest voices."

DeVos, from Michigan, told The Associated Press in July, "A lot of the things he has said are very off-putting and concerning."

On Wednesday, Trump said of his UN selection: "Gov. Haley has a proven track record of bringing people together regardless of background or party affiliation to move critical policies forward for the betterment of her state and our country."

She said she loved her South Carolina post but "when the president believes you have a major contribution to make to the welfare of our nation, and to our nation's standing in the world, that is a calling that is important to heed."

The president of the National Education Association, Lily Eskelsen Garcia, said in a statement that for years DeVos "has lobbied for failed schemes, like vouchers - which take away funding and local control from our public schools - to fund private schools at taxpayers' expense."

And Randi Weingarten, president of the American Federation of Teachers, tweeted, "Trump has chosen the most ideological, anti-public ed nominee since the creation of the Dept of Education."

At the same time, some conservatives warned that the longtime Republican donor, who has spent millions of dollars - along with her husband - to promote candidates who favor charter schools and school vouchers, also supports the Common Core education standards that Trump railed against during the campaign.

Conservatives already were grappling with Trump's Tuesday concession that climate change may be connected to human activity and his reversal of a campaign vow to pursue a criminal investigation into Democratic rival Hillary Clinton.

DeVos addressed criticism head-on, posting a "Q&A" statement that said directly about Common Core: "I am not a supporter - period."

"I do support high standards," she said. But along the way Common Core "got turned into a federal boondoggle."

Just two weeks ago, Trump shocked the political world - including many in his own party - by winning the presidential contest. The billionaire New Yorker has yet to take any formal steps to separate from his international business empire as experts in both parties warn of potential conflicts of interest.

Trump will be sworn into office in less than 60 days. Beyond his Cabinet, he must fill hundreds of high-level administration posts.

After secretary of state, the UN ambassador is the highest-profile diplomatic position, often serving as the voice for U.S. positions on the international stage.

As for DeVos, her family has been active in Republican politics for decades, especially as donors. Her husband, Dick, is an heir to the Amway fortune and a former president of the company.

The American Federation for Children Action Fund, which DeVos chairs, and its state-affiliated PACs invested in 121 races in 12 states in the general election, spending spent $210,000 to support "pro-school choice" candidates in Oklahoma alone.

"Under her leadership we will reform the U.S. education system and break the bureaucracy that is holding our children back so that we can deliver world-class education and school choice to all families," Trump said.

DeVos said in her own statement, "The status quo in education is not acceptable."
Related topics:
politicsdonald trumpthanksgiving2016 election
Copyright © 2021 by The Associated Press. All Rights Reserved.
DONALD TRUMP

Trump goes after Pence, McConnell in speech to party donors