U.S. wins in shootout over Canada to capture gold at world juniors 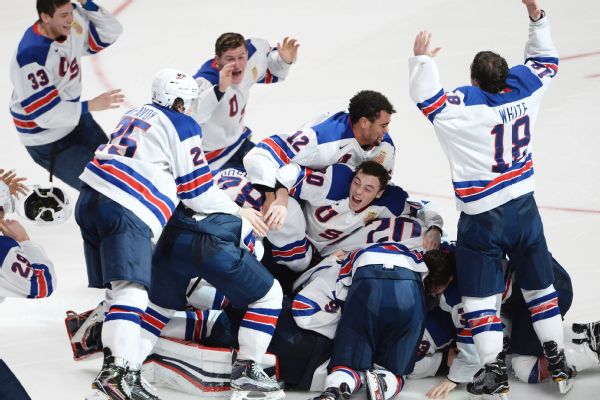 The game was decided in the five-round shootout after a 20-minute overtime period.

On Wednesday in the semifinals, Terry scored on all three of his shootout attempts to give the United States a 4-3 victory over Russia. He beat the goalies between the legs on all four attempts in the two games.

"Before the shootout, I was thinking about trying something different,'' Terry said. "As I came down, I decided I just had to try to go five-hole.''

On Wednesday in the semifinals, Terry scored on all three of his shootout attempts to give the United States a 4-3 victory over Russia. The Americans won all seven of their games in the tournament, also beating Canada 3-1 on Saturday in the group finale.

The University of Denver forward and Anaheim Ducks draft pick beat Canada goalie Carter Hart in the fourth round of the shootout. Parsons then stopped Anthony Cirelli's attempt, American Jeremy Bracco missed a chance to end it in the fifth round, and Nicholas Roy mishandled the puck on Canada's last attempt.

"He's unbelievable,'' Boston University forward Clayton Keller said about Terry. "He's a guy that doesn't get nervous. He's always calm and confident and he just has that ice in his veins. He came up clutch for us again, and (Parsons) made that big save at the end.''

"It was a great atmosphere in the building,'' Parsons said. "It gave me chills. It's unbelievable to win this for your country.''

The Americans won its fourth title and first since 2013. They won all seven of their games in the tournament, also beating Canada 3-1 on Saturday in the group finale.

"When we got together in Michigan for our camp this summer, there was something special with these guys,'' said U.S. coach Bob Motzko of St. Cloud State. "This team had great camaraderie, tremendous heart and always battled. This is a special group who will forever walk together.''

"It's hard for me right now," said Canadian defenseman Thomas Chabot, the tournament MVP. "I lost one of the biggest games of my life."

"It was such an up-and-down game,'' Terry said. "We were down two goals twice. I think when we were down 2-0 and came back to tie it we got some confidence because it sucked to go down two goals right away. But, we knew as a team that no matter how we played, we had the confidence to get back into the game.''

Bouyed by the first near-sellout crowd at the more than 21,000-seat Bell Centre,Chabot and Jeremy Lauzon opened the scoring for Canada in the first period.

Boston University teammates Charlie McAvoy and Kieffer Bellows countered for the U.S. in the second.

Canada took a 4-2 lead in the third on goals by Nicolas Roy and Mathieu Joseph, but Bellows cut it to one with his second of game and Boston College'sColin White tied it with nearly 13 minutes left.