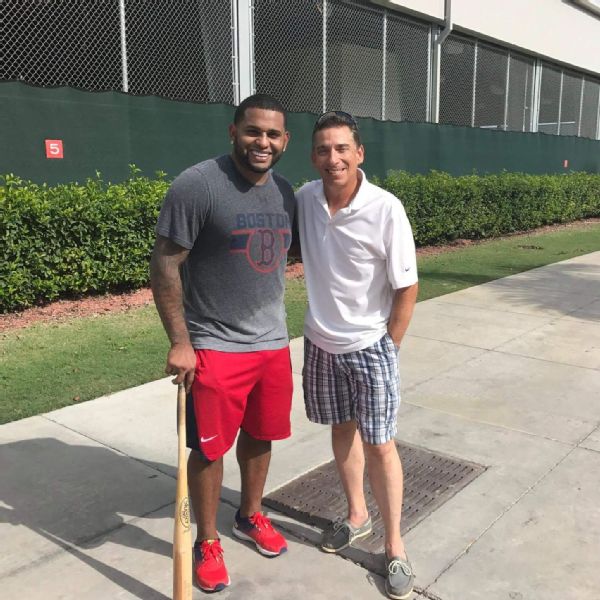 The first full-squad workout for the Boston Red Sox isn't until next Friday, but that didn't stop Pablo Sandoval from showing up early in Fort Myers, Florida.

More than a week early, in fact.

Sandoval, whose 2016 season ended in early May due to shoulder surgery, was at JetBlue Park on Thursday, reportedly taking swings from both sides of the plate and looking noticeably slimmer than he has in the past.

The veteran third baseman has vowed for a 2017 turnaround, after mostly struggling since signing a five-year, $95 million contract with Boston in November 2014. In December, he admitted he got "complacent"after striking the big deal with one of baseball's big spenders and pledged to start his career all over again with his shoulder fully healed.

Pictures he has posted on social media this offseason have shown a slimmed-down Sandoval, and he even opted not to be part of Venezuela's World Baseball Classic team in order to gear up for the major league season.

"He worked his tail off," Bradley Jr. said, according to The Boston Globe. "You can definitely tell he's worked hard.

"Happy to see him. And happy to see him happy. He's a difference-maker. He's able to impact the game. We have faith that he's going to do very well.

"He has a chip on his shoulder, and I love that. I know he wants to get back and play in his element. People always doubt you, even if you're Mike Trout. You have to believe in yourself. You focus on that and getting better and not let the outside distractions bother you."

Sandoval declined to speak with reporters Thursday, saying he'll talk next week instead.

The Red Sox, meanwhile, will be looking at Sandoval to help fill the lefty-swinging lineup void of the now-retired David Ortiz. The 30-year-old has hit just .242 with 10 home runs and 47 RBIs in 129 games over two seasons for the Red Sox after several good years for the San Francisco Giants.

"One of the keys for us is going to be Panda," Boston manager John Farrell said earlier this offseason, invoking Sandoval's "Kung Fu Panda" nickname that was earned in San Francisco. "That's not to put it all on him, but here's a left-handed bat who is a proven guy and has every opportunity to make a major impact on our team this year."
Related topics:
sportsespnboston red soxmlbjackie bradley jrbosoxkung fu pandapablo sandoval
Copyright © 2021 ESPN Internet Ventures. All rights reserved.
TOP STORIES
Man shot in chest while standing at Brooklyn intersection
NWS confirms 8 tornadoes touched down between NJ, PA
2 workers rescued from construction site collapse in NYC
Iconic NJ restaurant closing after 65 years
Eyewitness News evening update
Baseball is now the official sport of New York
Pet food company announces voluntary recall
Show More
What we know about the delta variant
Dream job: Make money by watching 'Grey's Anatomy'
OB-GYN associations recommend all pregnant people get vaccinated
Connecticut raises minimum wage to $13 an hour on Sunday
Saturn will glow brightly in the sky next week: How to see it
More TOP STORIES News