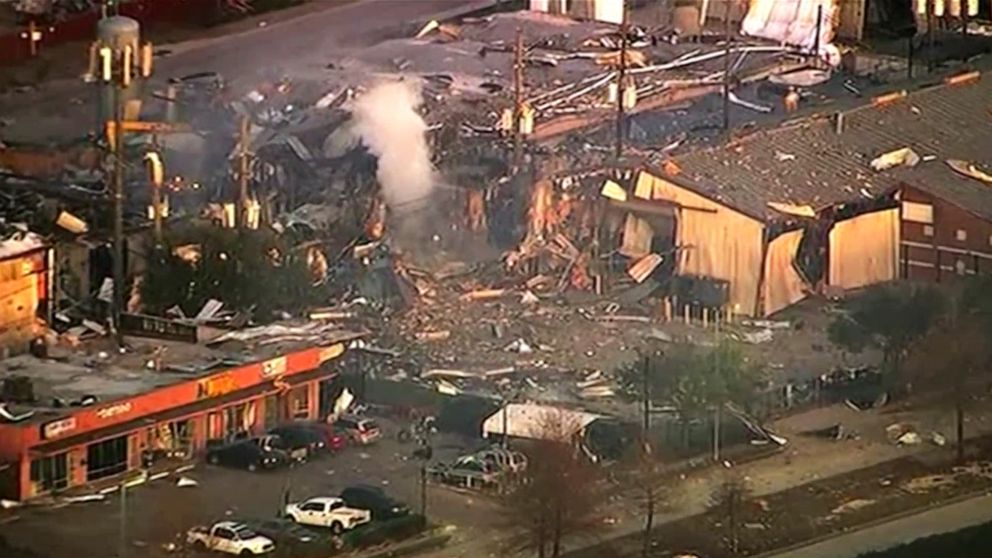 Multiple homes and a strip mall nearby also sustained "significant damage" in the blast, which happened around 4:30 a.m. local time, Samuel Pena, of the Houston Fire Department, said at a press conference.

Houston Police Chief Art Acevedo said a full arson investigation has been launched, but noted that there is no reason to believe it was terror-related or an intentional act. He said it is protocol to conduct an investigation and that it will be handled by multiple agencies to ensure that regulations had been followed prior to the explosion.

The two victims, Frank Flores and Gerardo Castorena Sr., were employees of Watson Grinding and Manufacturing, whose plant sustained the blast, authorities said.

"We are saddened by the tragic passing of our coworkers, and our deepest sympathies are with their families for their profound loss," company officials said in a statement. "We are working diligently to address the situation and [are] cooperating with the federal, state and local authorities investigating the accident."

Authorities urged residents who felt the blast to search around their homes for debris and body parts. Acevedo warned the public not to touch either if they do find them, but to instead call Houston police.

Drones were also brought in to conduct a grid search and inspect roofs for debris.

Around 18 people checked in at local emergency rooms, complaining of minor injuries from the blast, according to the Houston Fire Department.

It was not yet clear what caused the explosion, but Pena noted that there was a leak coming from a 2,000-gallon tank of propylene.

He said the leak has been secured and there are no concerns with air quality at this time.

As of Friday afternoon, authorities were waiting for a fire that was sparked by the explosion to burn out before conducting additional searches. Although contained, the fire was not being extinguished manually by firefighters in order to avoid creating a runoff or other hazards, Pena said. ATF was also on the scene assisting.

The explosion was so strong that nearby residents between Gessner Road and Steffani Lane in Houston's Westbranch neighborhood reported doors being blown off their hinges, baseboards blown off and storm doors shattered, according to Houston ABC station KTRK. The force of the blast rattled windows for miles around.

Following the blast, temporary shelters were set up at 4703 Shadowdale Drive. At least 48 people were sheltering there, according to KTRK.

Acevedo asked for the public to consider offering help and donating to the families who had been affected.

"This is an area where it isn't the most affluent, so my thoughts are with all the individuals, whether they rent or own, that will be potentially displaced," Acevedo said.