2 ISIS 'Beatles' transferred from Syrian prison to US military custody 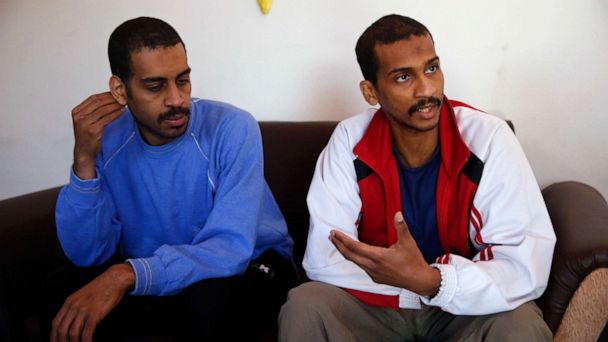 The U.S. military has taken custody of two notorious British Islamic State fighters nicknamed "The Beatles," who were responsible for the executions of western hostages.

They were moved on Wednesday from a Kurdish-run prison in Syria to a safe location, officials said. The move of the two detainees occurred as Turkey's military forces pushed into Syria targeting the U.S.-backed Syrian Democratic Forces (SDF) that helped defeat ISIS in Syria.

Alexanda Kotey and El Shafee Elsheikh are British nationals who were part of a four-person ISIS cell behind the video executions of western hostages, including American journalist James Foley.

Mohammed Emwazi, a member of the group who earned notoriety as "Jihadi John" was killed in a 2015 U.S. drone strike, Aine Davis, another member of the terror cell is serving a prison sentence in Turkey.

A U.S. official told ABC News that the two detainees had been transferred from SDF control to an undisclosed "safe location."

Later, a U.S defense official confirmed that the U.S. military had taken control of two high value individuals from the SDF, but did not confirm their identities.

"They are being held in U.S. military custody pursuant to the law of war," said the official. "They have been moved out of Syria and are in a secure location."

The official said that the transfer occurred on Wednesday and that it had been negotiated by the United States.

The transfer of the two detainees was first reported by The Washington Post, which also reported that the pair had been taken to Iraq.

President Donald Trump had hinted at the transfer on Wednesday afternoon at a White House event.

"We are taking some of the most dangerous ISIS fighters out," said Trump. "We've taken them out and we're putting them in different locations where it's secure."

Both Kotey and Elsheikh had been held by Kurdish forces at prisons in northern Syria.

The move reflected concerns about what would happen to the 12,000 ISIS prisoners in SDF-run prisons if Kurdish guards left their posts to help fight the Turkish military.

On Wednesday, a U.S. official confirmed to ABC News that beginning Tuesday there had been some reductions in manning at some of the SDF-run prisons.

The U.S. and United Kingdom have been involved in ongoing discussions about the possible transfer of the pair to U.S. control so that they could be prosecuted in the United States for the executions of American citizens.