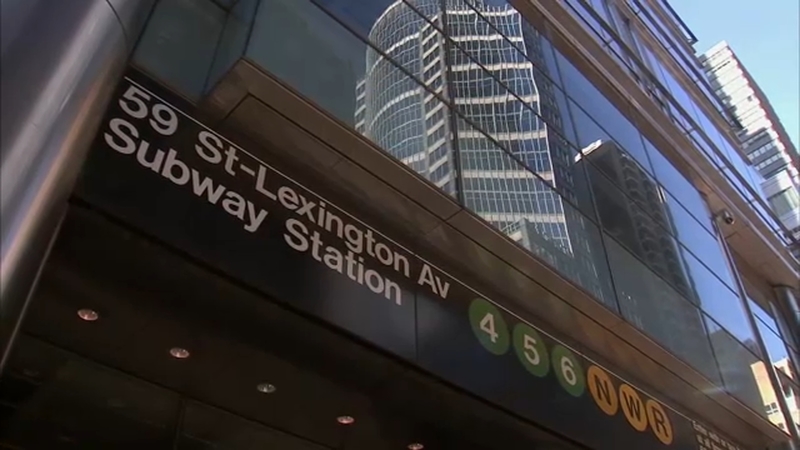 Subway dispute turns into slashing on Upper East Side

UPPER EAST SIDE, Manhattan (WABC) -- Two men who were slashed on a subway train on the Upper East Side Tuesday morning held the suspect for police, the latest incident in a surge of subway crimes -- even though ridership remains down.

The victims, both 42 years old, were riding to work together on a downtown N train just after 4:45 a.m. when the got into a dispute with an apparently homeless 22-year-old man, identified as Finn Barbuto.

Police say he pulled a folding knife and slashed both, one in the hand and torso and the second in the wrist and forearm.

The two men managed to hold Barbuto at the 59th Street-Lexington Avenue station until officers arrived. Police said one of the victims threw his UPS jacket over the suspect, disorienting him

Barbuto is charged with two counts of assault and two counts of criminal possession of a weapon. He was undergoing psychiatric evaluation at Bellevue Hospital.

The victims were taken to New York-Presbyterian Hospital for treatment of superficial wounds.

A knife was recovered from the scene.

Statistics show that at least one person is attacked in the New York City Transit System every day. Donna Barreiro, a nurse anesthetist who takes the subway to and from work, does what she can not to be one of them.

"I'm always aware of who's around me, and I'm never on my cell phone," she said. "I think the thing is, you need to stay alert and pay attention."

Overall, crime in the transit system is down 59% for the first two months of this year. Yet there have been 79 serious felony assaults, roughly the same number as last year, in a system where ridership is off by 68%.

"Continuing attacks in the subway system, while isolated and sporadic, are outrageous and unacceptable," she said. "Every customer, and each of our brave, heroic transit workers deserves a safe and secure transit system. We continue to call on the city to surge mental health services into the subways - and while we appreciate the hundreds of NYPD officers that have been added to the system in recent weeks, we continue to believe more are needed as the city reopens and we welcome riders back."

Some stations, like the Fifth Avenue station on the N line, are virtually deserted in the middle of the afternoon. Many trains are running more than half empty, and the homeless are not only more visible, by some accounts there are more of them.

"People who need help are not getting help," subway rider Steve DeFrank said. "And the subway is where they're going."

Patrols were stepped up Tuesday at the 59th Street station. On NY1, NYPD Commissioner Dermot Shea defended the department's response.

"We know that ridership is down," he said. "We actually had an incident today of a stabbing in transit. But there are a lot of indicators that are good. We are going to continue to keep riders safe. We have officers out there. We are amplifying that message in social media and other ways. And that's the message we want to portray."