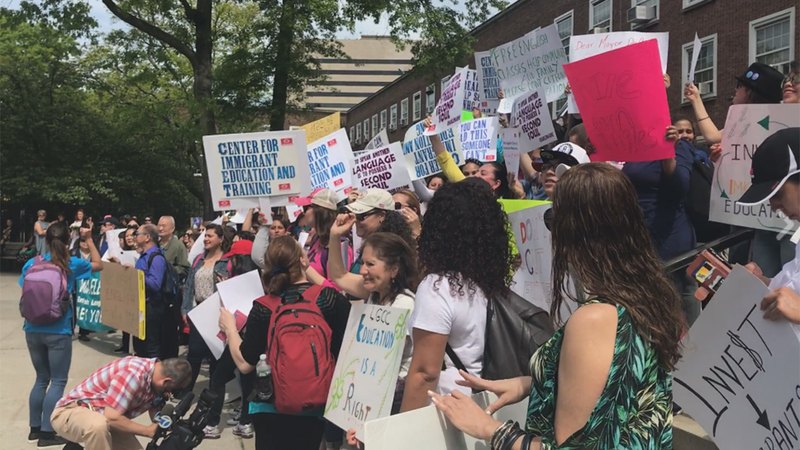 KEW GARDENS, Queens (WABC) -- Hundreds rallied in Queens Tuesday in support of an adult literacy program funded by the city that they say is critical to help immigrants find better jobs.

But many fear it could get cut from the next budget.

They gathered on the steps of Queens Borough Hall and plan to stay front and center as Mayor Bill de Blasio and the City Council fine tune the budget.

The protesters are all students taking the classes, and they are afraid the program they rely on so much may soon fall through the cracks.

"When we're talking about English classes, we're also talking about how people form networks with each other," said Amy Torres, of the Chinese-American Planning Council. "How they find peers in their neighborhood."

"I need to support my children," she said. "My family all was taught English. Only me was tight Mandarin and Cantonese."

The mayor's executive budget for 2018 does not include $12 million for adult literacy programs, and the group is demanding he pay for those classes if he wants to make good on his promise of being pro-immigrant.

"Nearly 6,000 individuals in the city would be kicked out of their classes when the budget is closed at the end of June," said Kevin Douglas, of United Neighborhood Houses.

More protests are planned in the future, with one at Bronx Borough scheduled for next week.

As for the mayor, a City Hall spokesperson said the needs of this community will be considered as part of the ongoing budget process. City officials claim they are doing their part, however, including $16 million set aside for immigrant legal defense services.
Related topics:
educationkew gardensnew york citybill de blasionew york city councilbudgeteducationprotestimmigration
Copyright © 2021 WABC-TV. All Rights Reserved.
TOP STORIES
Biden family dog Champ dies
How NYC and the Tri-State are celebrating Juneteenth
George Floyd statue unveiled in Brooklyn
Kids dive for cover as gunman opens fire on NYC sidewalk
AccuWeather: Humid with PM storm
Will NYC, Tri-State area be impacted by Tropical Storm Claudette?
Dazzling Durant, hobbled Harden lead Nets into Game 7 vs. Bucks
Show More
What to know about voting in NYC's mayoral primary
Islanders, down 2-1 vs. Lightning, looking to bounce back once again
NYC elections: What is ranked choice voting?
COVID Updates: Canada, US extend border restrictions until July 21
Cole Beasley would rather retire than get vaccinated, follow NFL COVID rules
More TOP STORIES News