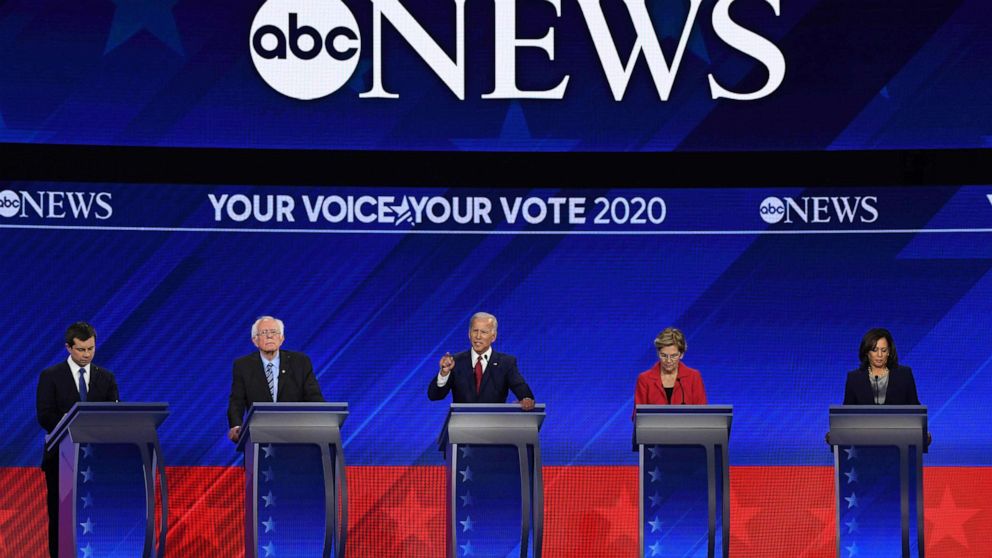 ABCNews
By HOPE HOWARD
The 2020 Democratic candidates discussed the environment for nearly 43 minutes while on the debate stage this presidential election cycle, an unprecedented amount compared to past elections.

But approaching the fourth Democratic primary debate next week, amid a furious push from progressives and environmentalists, climate change is emerging as one of the 2020 election cycle's most pressing issues.

"What the president of the United States should do is not deny the reality of climate change, but tell the rest of the world that instead of spending $1.5 trillion on weapons of destruction, let us get together for the common enemy," said Vermont Sen. Bernie Sanders June 27 during the first Democratic debate in Miami. "And that is to transform the world energy system away from fossil fuel to energy efficiency, and sustainable energy."

One of the first 2020 candidates to beat the drum for climate change was Washington Gov. Jay Inslee, who pressed the Democratic National Committee to dedicate one of its presidential primary debates solely to the issue of climate change -- an initiative the DNC turned down.

"While climate change is at the top of our list, the DNC will not be holding entire debates on a single issue area because we want to make sure voters have the ability to hear from candidates on dozens of issues of importance to American voters," DNC Communications Director Xochitl Hinojosa said in a statement.

Inslee pulled out of the race in August, but his environmental policies and diatribe against the Trump administration's lack of emphasis on combating climate change have made lasting impact in the election, pushing the candidates to become more progressive on the issue and more proactive in their policies.

As the Democratic pool narrows, nearly all of the remaining candidates have now announced plans to address climate change, most of which pledged to achieve "net zero" emissions by 2050.

Thai Jones, a Columbia University history professor specializing in radical social movements, told ABC News that this change in conversation has been spurred by "alarming" scientific discoveries and what he called resulting feelings of fear, anger and passion for legal action.

"We have known it has been an emergency for at least 10 years. But really, it was totally absent from presidential politics until this round of debates," Jones said. "So what has changed between then and now?"

Rafe Pomerance, one of the earliest environmental activists to bring attention to climate change on Capitol Hill, told ABC News he's seen politicians' attitudes towards the environment change drastically since he began his efforts in the 1980s.

Pomerance explained how 40 years ago, he was still trying to convince lawmakers that climate change was real.

"It was impossible to organize," he said. "There was not potential for a big grassroots outpouring."

Minimizing the issue during the 2020 presidential debate is "just not possible anymore," as Pomerance pointed out, for two reasons.

First, recent scientific discoveries -- such as rising sea levels, increased wildfires and degradation of the Amazon rainforest, untimely earthquakes and hurricanes, as well as significant temperature changes -- are issues that can't be ignored, he said.

Second, he said, is the "fact that young people are highly organized, and they have helped to vault the issue into the presidential campaign."

Swedish environmental activist Greta Thunberg, 16, inspired the Sept. 20 global climate strike -- a protest that took place in 150 countries across the world and gathered the support of millions of people. Thunberg made her case in a speech before world leaders at the United Nations Climate Action Summit on Sept. 24.

"People are suffering, people are dying, entire ecosystems are collapsing," Thunberg told them. "We are in the beginning of a mass extinction, and all you can talk about is money and fairy tales of eternal economic growth."
Report a correction or typo
Related topics:
abc newsnational
Copyright © 2020 ABC News Internet Ventures.
More Videos
From CNN Newsource affiliates
TOP STORIES