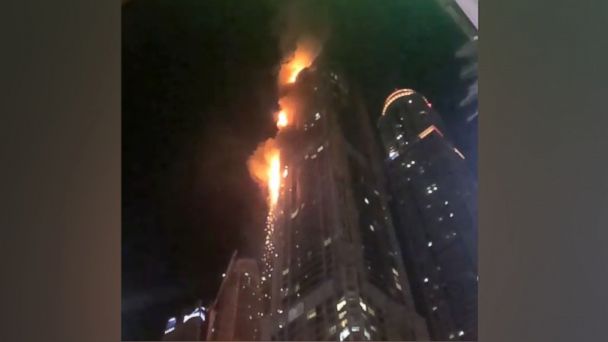 Firefighters have brought a massive fire that broke out at a residential skyscraper in Dubai under control, according to local officials.

The Dubai Civil Defence confirmed on Twitter that the blaze broke out at the Torch Tower early Friday morning.

The Dubai Civil Defence added that the building, which has 82 floors, was "successfully evacuated." No injuries have been reported so far, it said.

A resident who lives in the building told ABC News that it appears that the fire broke out around the 65th floor and spread down. The resident said she lives on the 59th floor and was able to escape to safety after running down the stairs.

The resident said a lot of people got out of the building but added that it was unclear if there were people still trapped inside. Displaced residents are being offered shelter at a nearby tower.

Several witnesses took to social media to post videos of the raging flames.

One video showed flaming debris falling from the skyscraper.

Cladding on the building was still being fixed after another fire broke out in 2015, according to the resident.

The Torch skyscraper is one of the tallest residential buildings in the world.