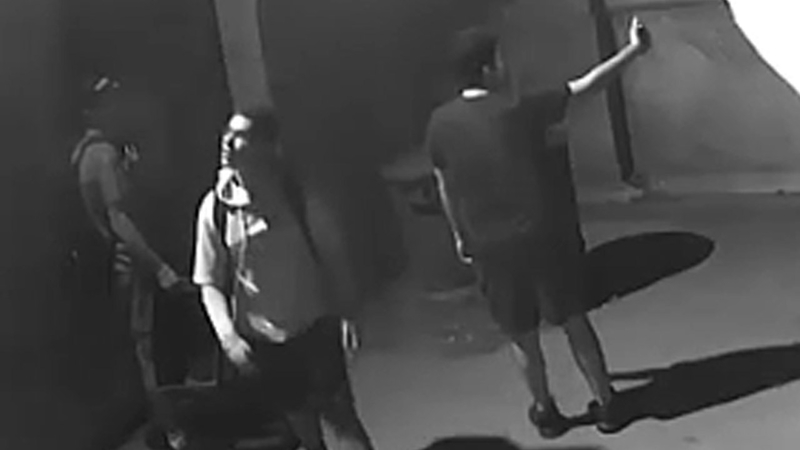 The NYPD said the three people damaged more than 40 headstones - some were knocked over and derogatory words were spray painted on others.

Police said the vandals also entered the memorial Abbey mausoleum and broke the marble stones on the front of approximately 15 vaults, as well as spray painting derogatory words. They can also be seen taking photos inside the cemetery.

This surveillance video released by the NYPD shows three people accused of damaging dozens of headstones inside a Brooklyn cemetery.

Families with loved ones buried there are disgusted by the senseless and hateful acts.

"It's sad, very sad, that someone could actually come into where people are resting in peace and vandalize like that," cemetery visitor Linda Quintana said. "I don't think they have a conscience."

Jennifer Moreta noticed some of the toppled tombstones while visiting her brother's grave Wednesday, but she had no idea about the maliciousness behind the damage.

"Today is his birthday, three years of death," she said. "I did notice some tombstones knocked over today. I had no idea that it was due to vandalism or people writing racial slurs...I don't know how I would feel if I was to come into the cemetery and see my brother's tombstone. I would be very, very angry and upset. No need to disrespect the dead. They can't do anything to you."

The cemetery has since hired 24-hour security, and they're in the process of contacting the families with damaged property.

"Our priority is the families, and we're working on restoring," cemetery chief of operations Stacey Cullen said. "We did a lot of work yesterday. Our men worked all through the night, and we're getting a lot of it cleaned up."

Police are looking for three males believed to be between 16 and 19 years old.

Anyone with information in regards to this incident is asked to call the NYPD's Crime Stoppers Hotline at 1-800-577-TIPS (8477) or for Spanish, 1-888-57-PISTA (74782).
Report a correction or typo
Related topics:
cypress hillsbrooklynnew york cityvandalismcemetery
Copyright © 2021 WABC-TV. All Rights Reserved.
More Videos
From CNN Newsource affiliates
TOP STORIES