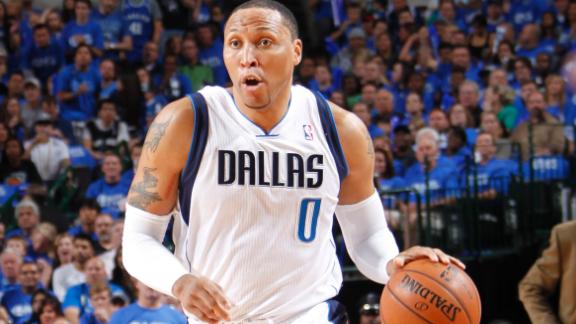 Free-agent defensive stalwart Shawn Marion is the latest target for LeBron James' Cleveland Cavaliers, according to sources with knowledge of the team's plans.

Sources told ESPN.com that the Cavaliers are hosting Marion in Cleveland on Monday and are trying to complete a deal with the former Phoenix Suns and Dallas Mavericks forward despite their inability to offer more than the league minimum.

Cavaliers general manager David Griffin has a strong relationship with Marion from their Phoenix days together and Cleveland, sources said, would love to bring Marion in to add depth, experience and versatility to a core that is expected to also feature Kevin Love if the Cavs complete their long-anticipated trade with Minnesota for the All-Star power forward later this month.

Marion is a natural target for the Indiana Pacers in the wake of the devastating injury suffered over the weekend by Paul George, but sources told ESPN.com that the Cavaliers -- thanks to the presence of James -- have the upper hand over Indiana or anyone else recruiting Marion at this juncture.

There was mutual interest in Marion's return to the Mavericks, but that option appeared to vanish last month when the Houston Rockets elected not to match Dallas' three-year, $46 million offer sheet to restricted free agent Chandler Parsons. Marion's exit -- after his irreplaceable contributions to Dallas' title team in 2011 -- was then essentially sealed by the Mavericks' subsequent deal with former Orlando Magic point guard Jameer Nelson, leaving only minimum money to offer the 36-year-old.

Griffin had an up-close view for Marion's most productive years with the Suns, but the former All-Star transformed himself into a top-shelf role player in Dallas, turning in five solid seasons with the Mavericks and guarding players at every position except center throughout his Dallas stint for a team with no shortage of defensive deficiencies.

During the Mavericks' 2011 title run, Marion averaged 11.9 points and 6.3 rebounds and guarded the likes of Kobe Bryant, Kevin Durant, Dwyane Wade and James at various points during that postseason.