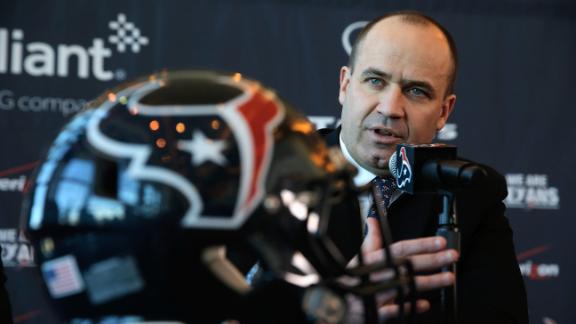 The Houston Texans are scheduled to host former UCF quarterback Blake Bortles for a pre-draft visit on April 15 and 16 and former Texas A&M quarterback Johnny Manziel a week later on April 21 and 22, a source confirmed.

The scheduled visits were earlier reported by KRIV-TV and the Houston Chronicle.

Houston has the first pick in this year's draft. The Texans have a need at quarterback, among other positions, and have said they will draft a quarterback at some point, having traded Matt Schaub (who started 2013 as the Texans' top quarterback) to the Raiders.

Houston signed veteran quarterback Ryan Fitzpatrick in free agency and has T.J. Yates and Case Keenum on the roster.

Clowney, Bortles, Manziel and former Louisville quarterback Teddy Bridgewater have all met individually with the Texans more than once already.

Texans' Plans For No. 1 Overall Pick
Adam Schefter discusses the Houston Texans' plans for the top pick in the 2014 NFL draft and the chances they wait on selecting a quarterback.

Bortles A Good Fit For Texans?
Tim Hasselbeck examines Blake Bortles' tape and explains why Bortles' skill set might make him the No. 1 overall pick in this year's draft.